- Samhain "To Walk The Night"

Illustrating an article for a musical legend like Glenn Danzig especially one for a publication like Revolver Magazine is not an everyday occurrence.

Considering the potential visibility of the project I was determined to create an illustration with a "deliberate effort to rebuild" the Malevolent One's iconic imagery. Although I wanted to present something that was imaginative and diverged from his work with The Misfits, Samhain, and solo albums, it had to be recognizable as a piece honoring Danzig's incredible career.

After discussing this project with the art director J. Hubbard, I initially wanted to avoid the obviousness of "the Danzig skull" and go for something out of left field. Considering this was for a special "Explorers" issue, it seemed natural to deviate from the norm.

However as many illustration projects go, you may have to re-evaluate your original premise.

Follow the process of how this amalgamation of imagery from Glenn Danzig's solo material, The Misfits, and Samhain was created for Revolver Magazine's "Explorers" issue. 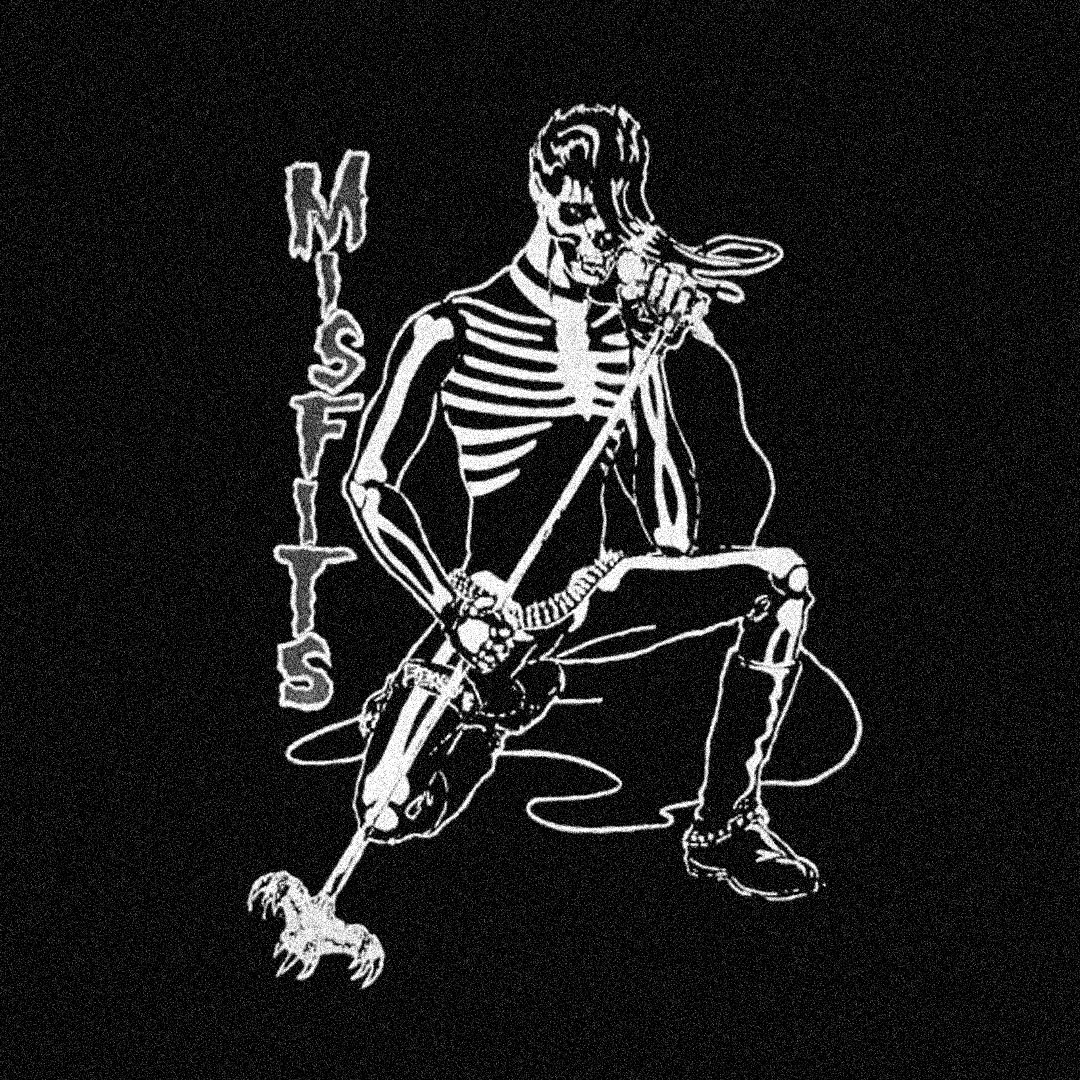 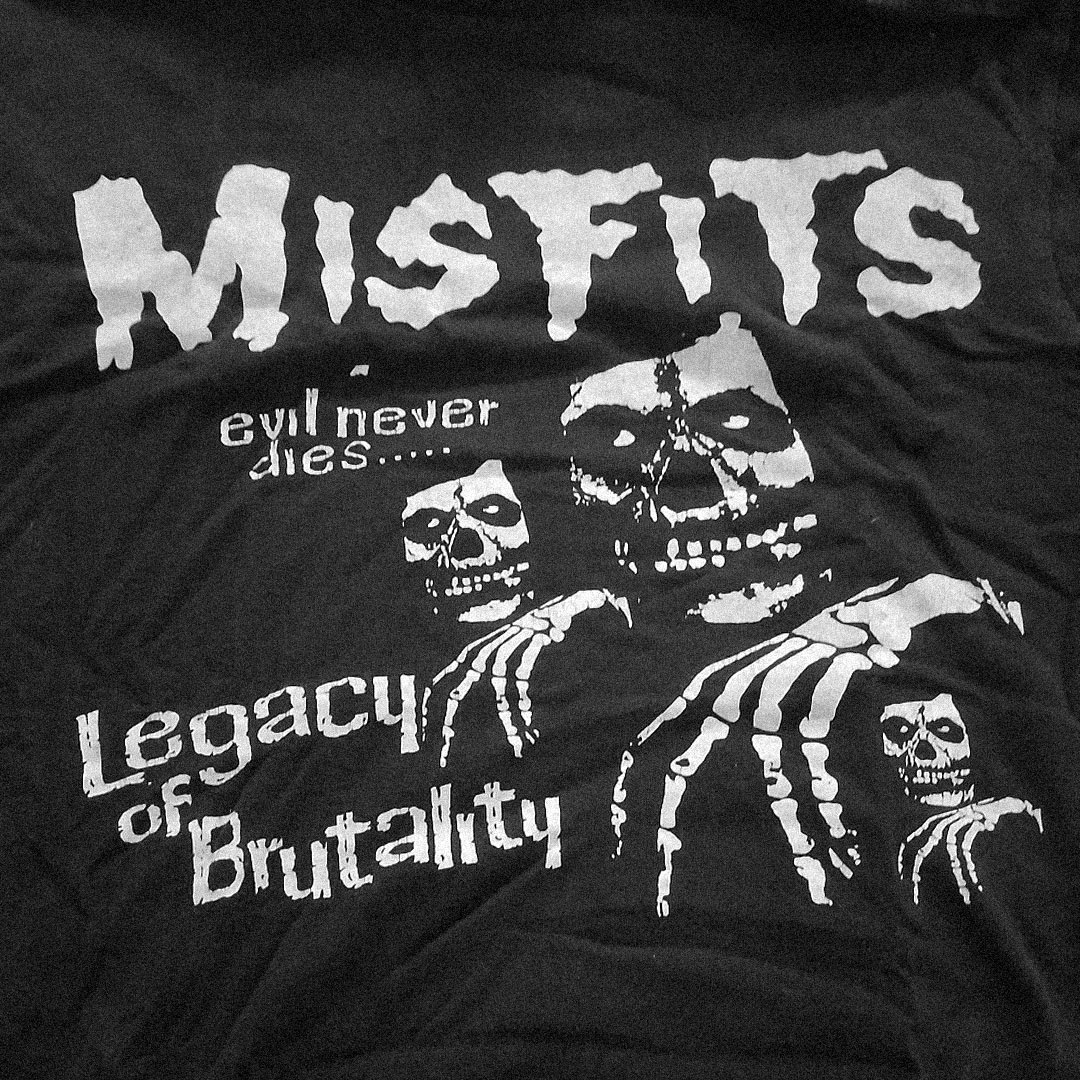 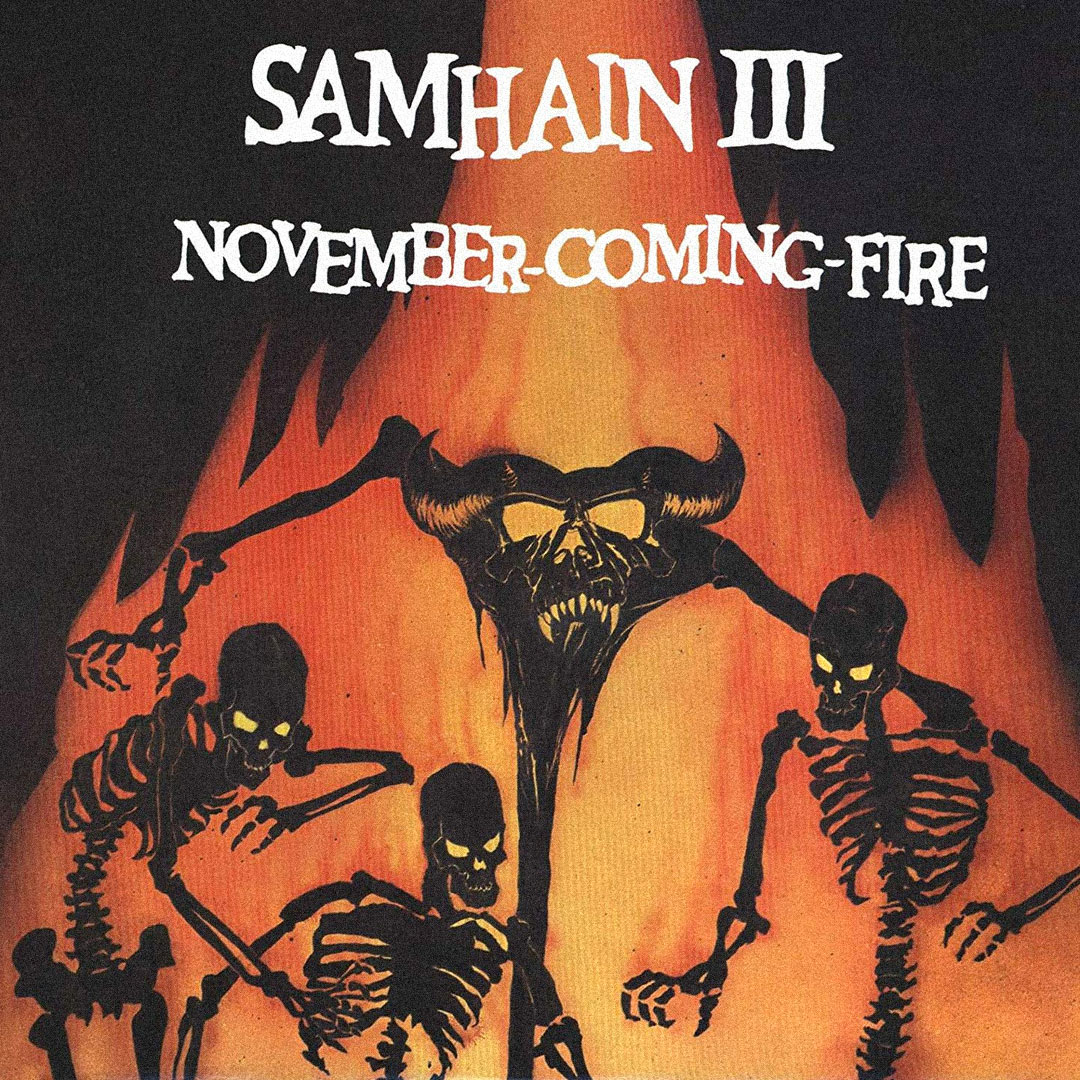 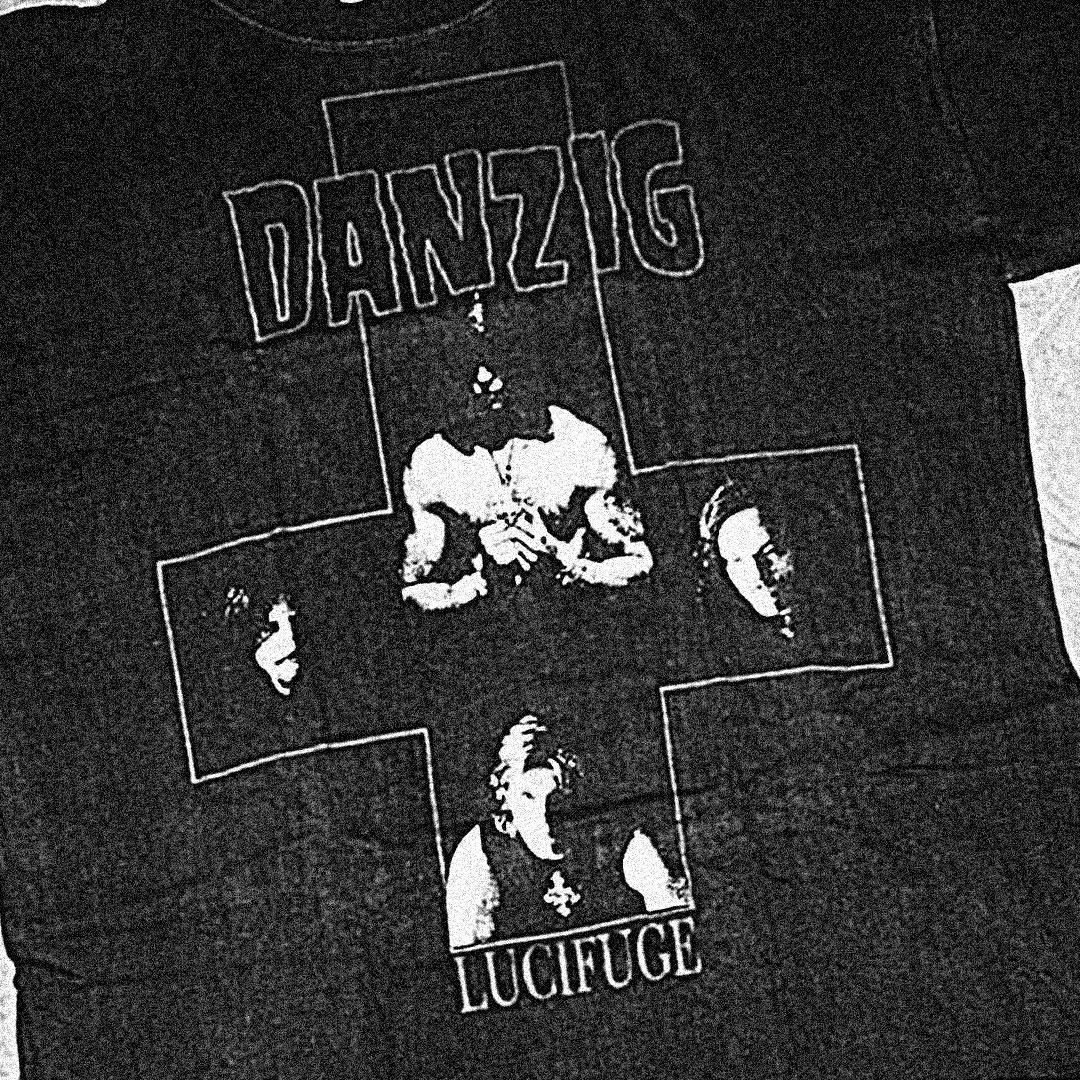 Misfits, Samhain, and Danzig imagery. The best place to start.

After reviewing the artwork from Danzig, Misfits, and Samhain albums, t-shirts, and posters I realized that focusing on just one era would not represent the extent of his vivid and pioneering music career.

Where do I begin? 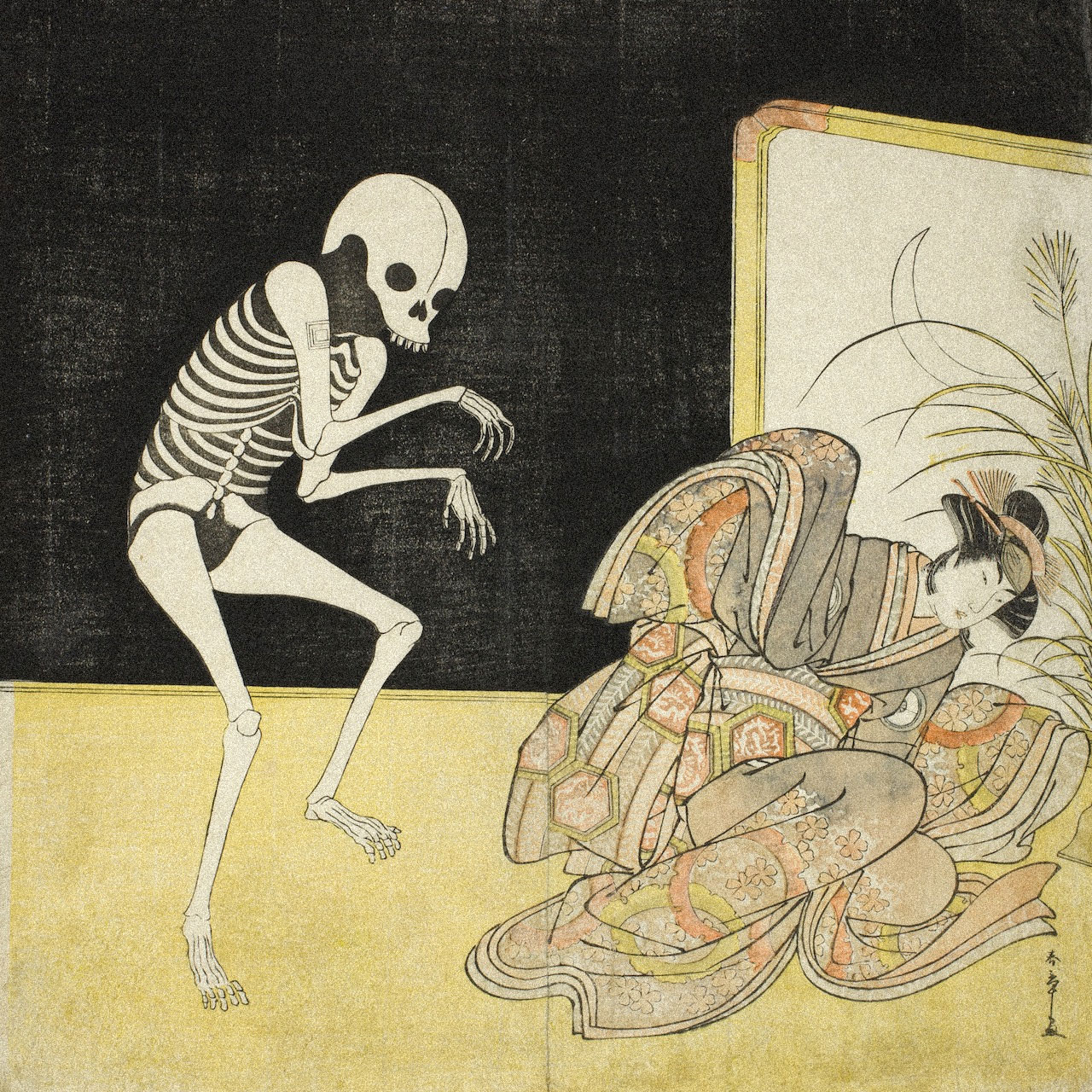 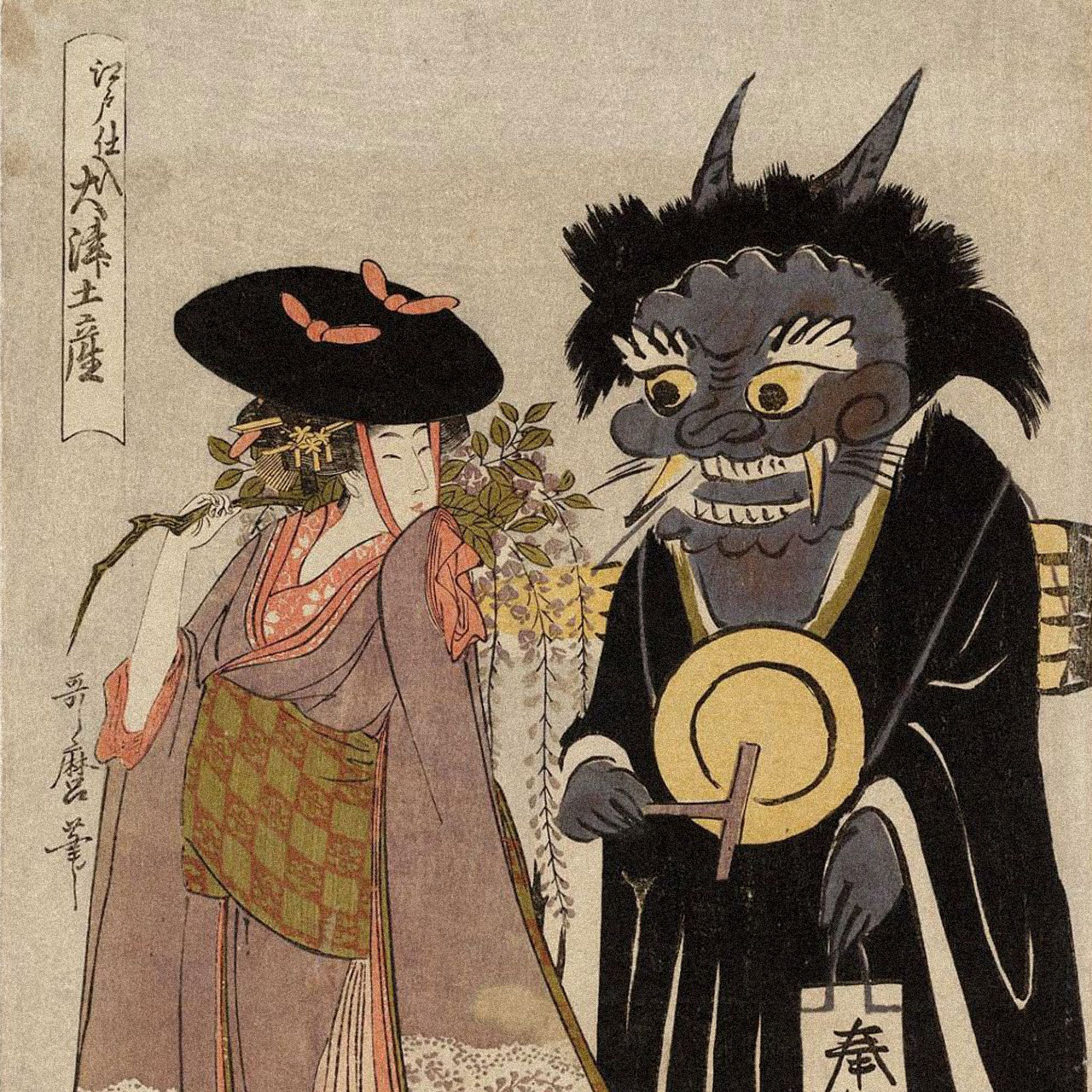 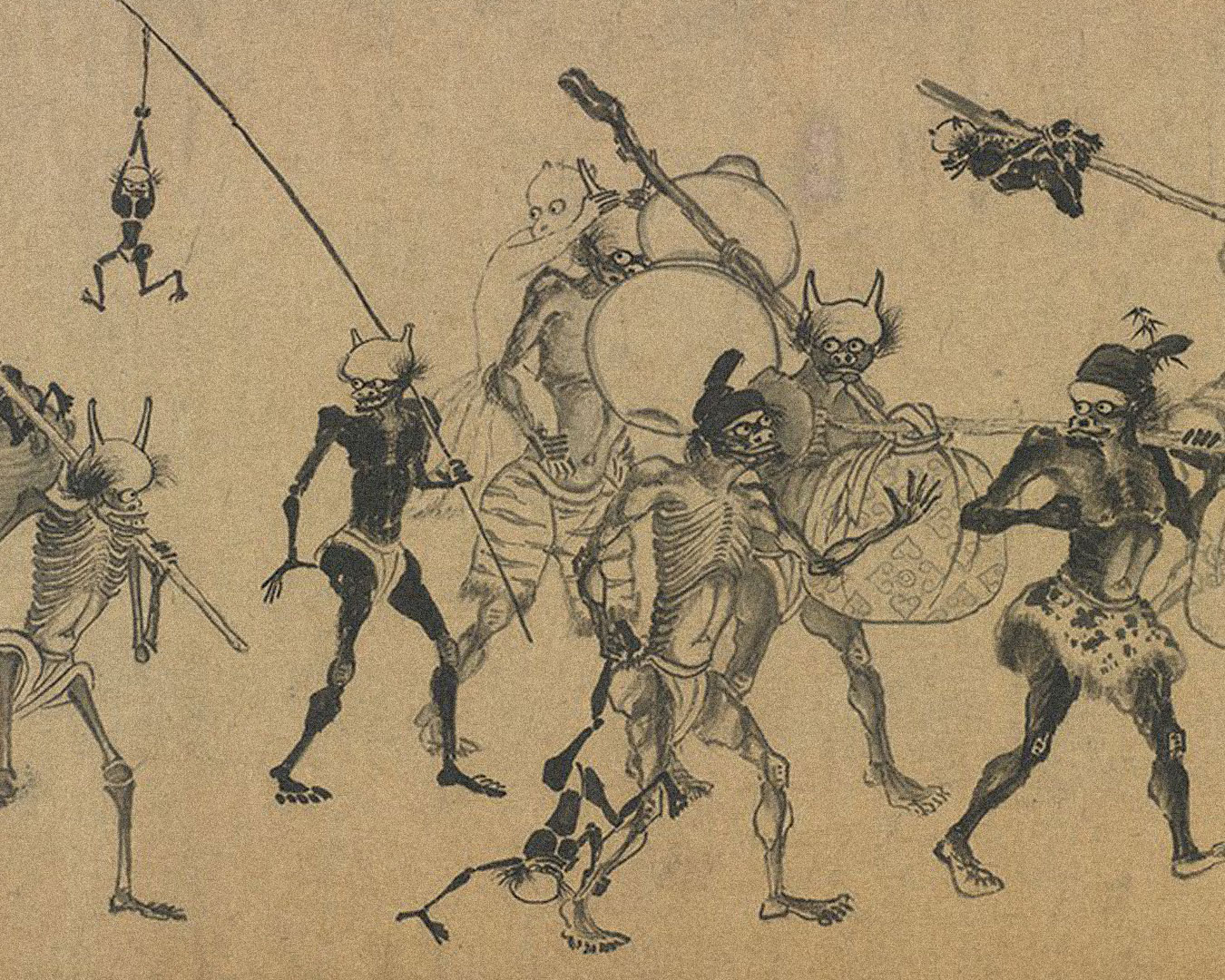 What other references or inspirations would work their way into the mix?

What mood am I setting? What am I trying to communicate? 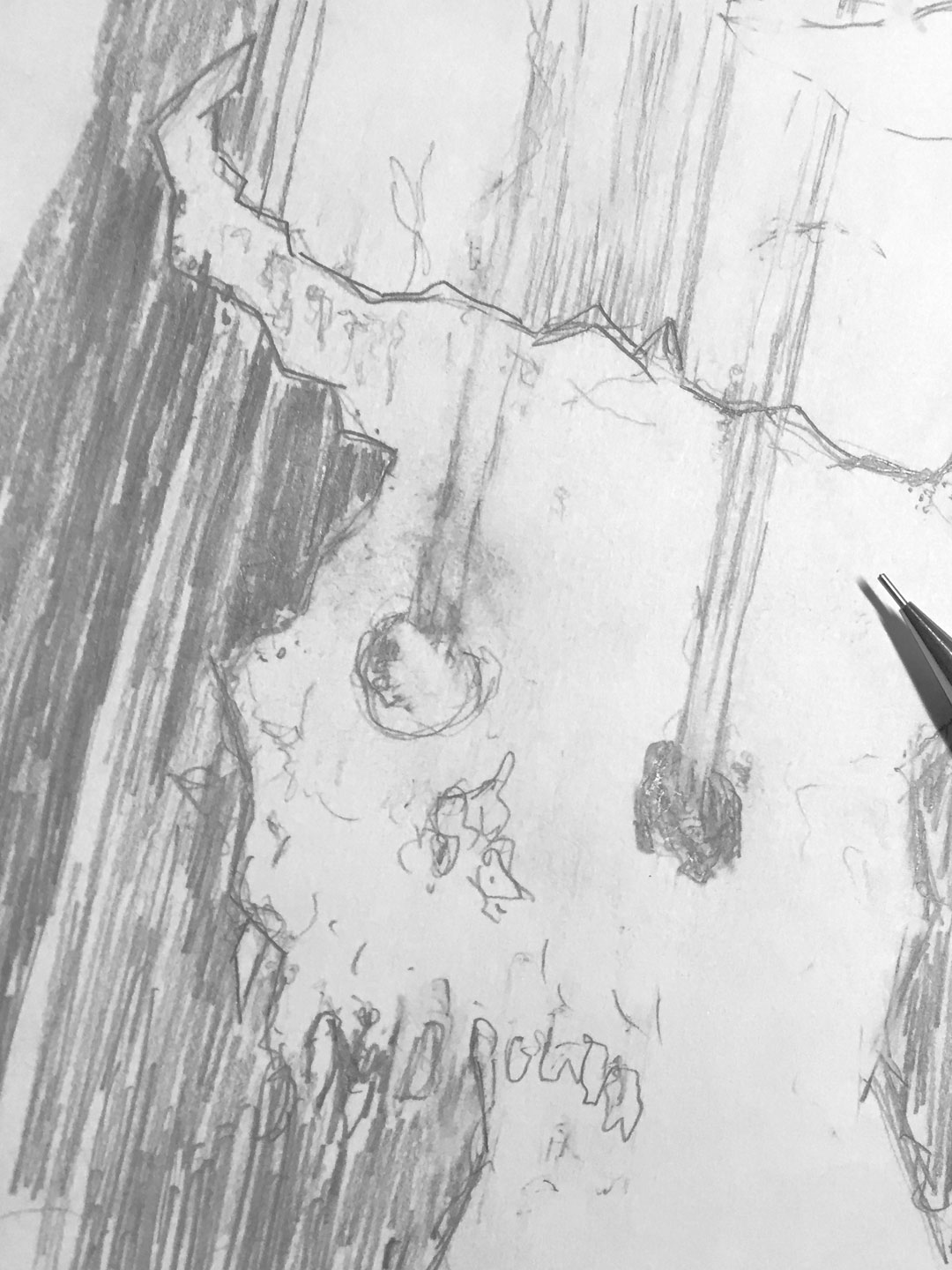 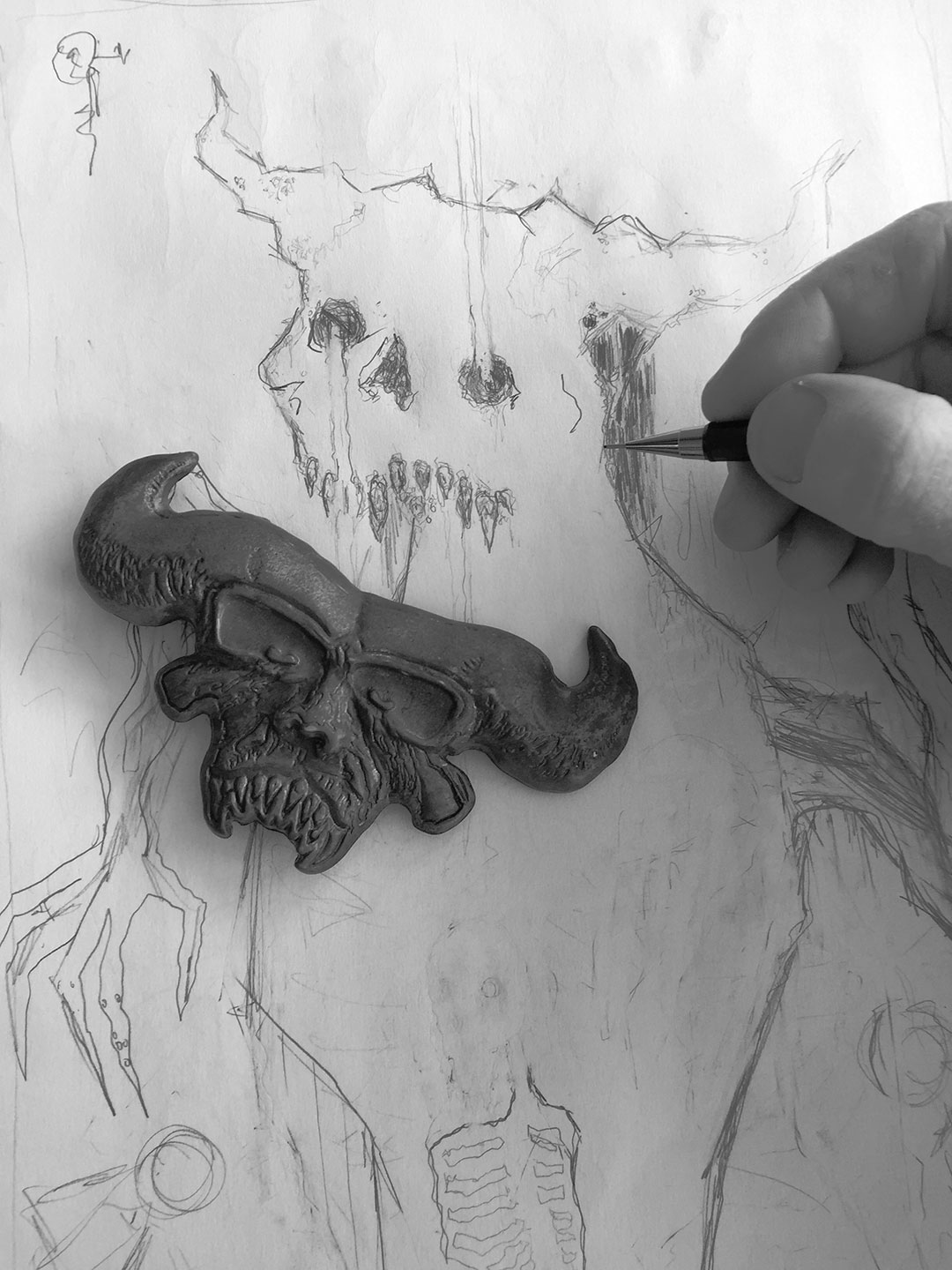 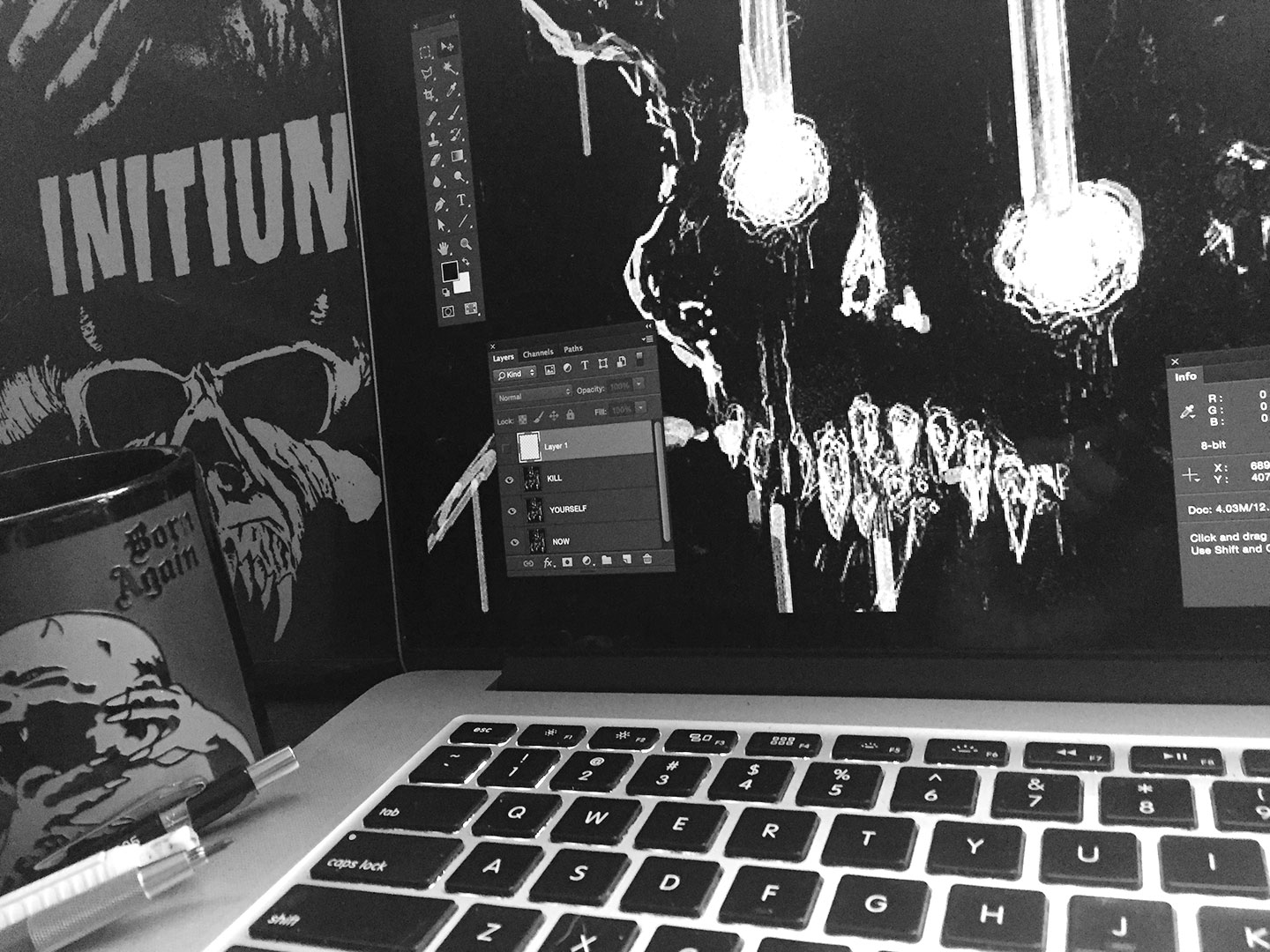 I should probably stick with the skull idea.

Could I distill the eras into something simple, iconic, and avoid the usual busy collage of imagery that tends to be a bit common. It's because I am an artist you see, and we always have to be "different". ...Sigh

But, could I get away with avoiding the Danzig skull?

It felt unlikely at this point, so I'd have to at least put my own strange spin on it.

Taking into consideration the rest of the source materials, how and what could I combine together? 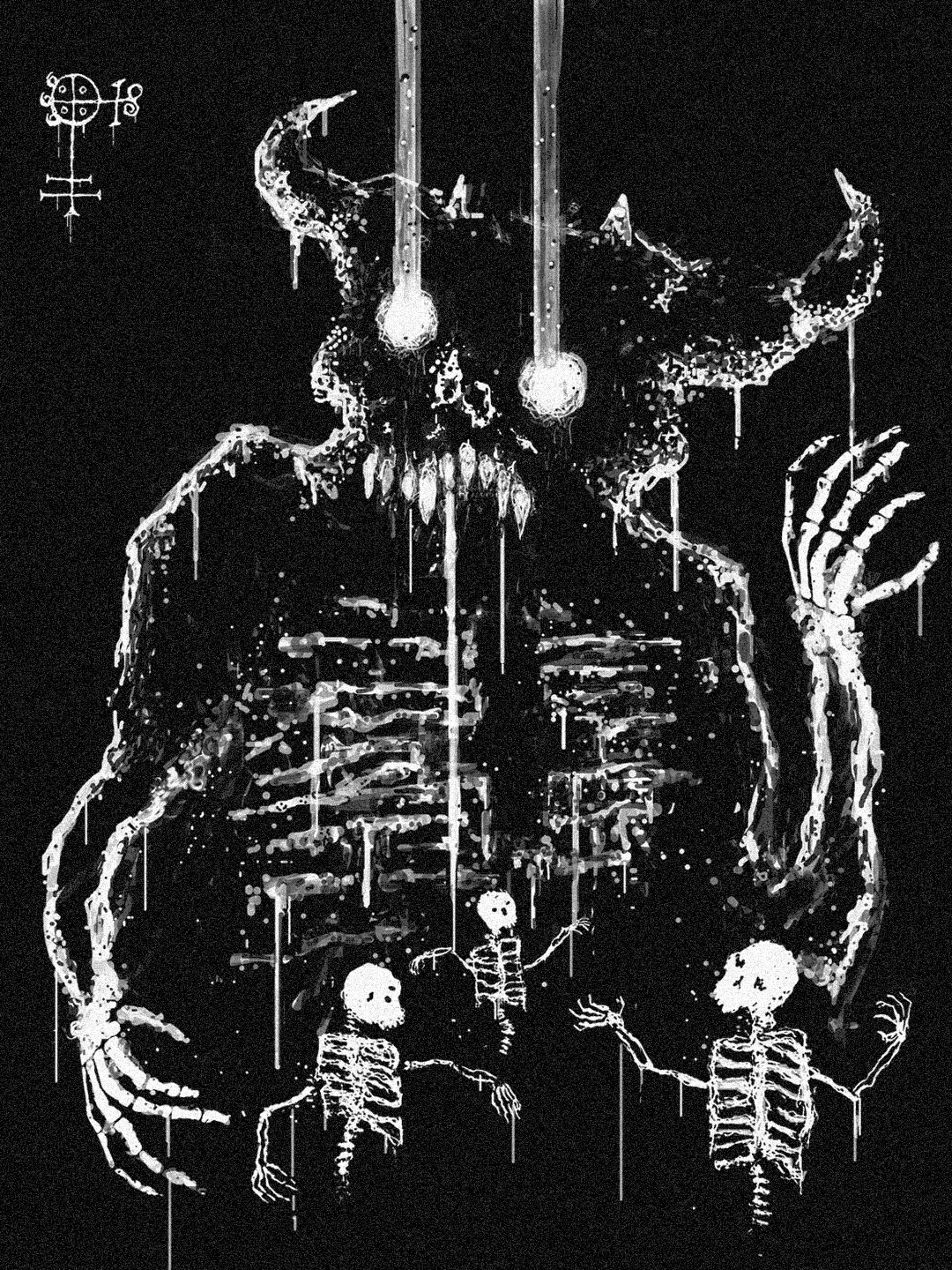 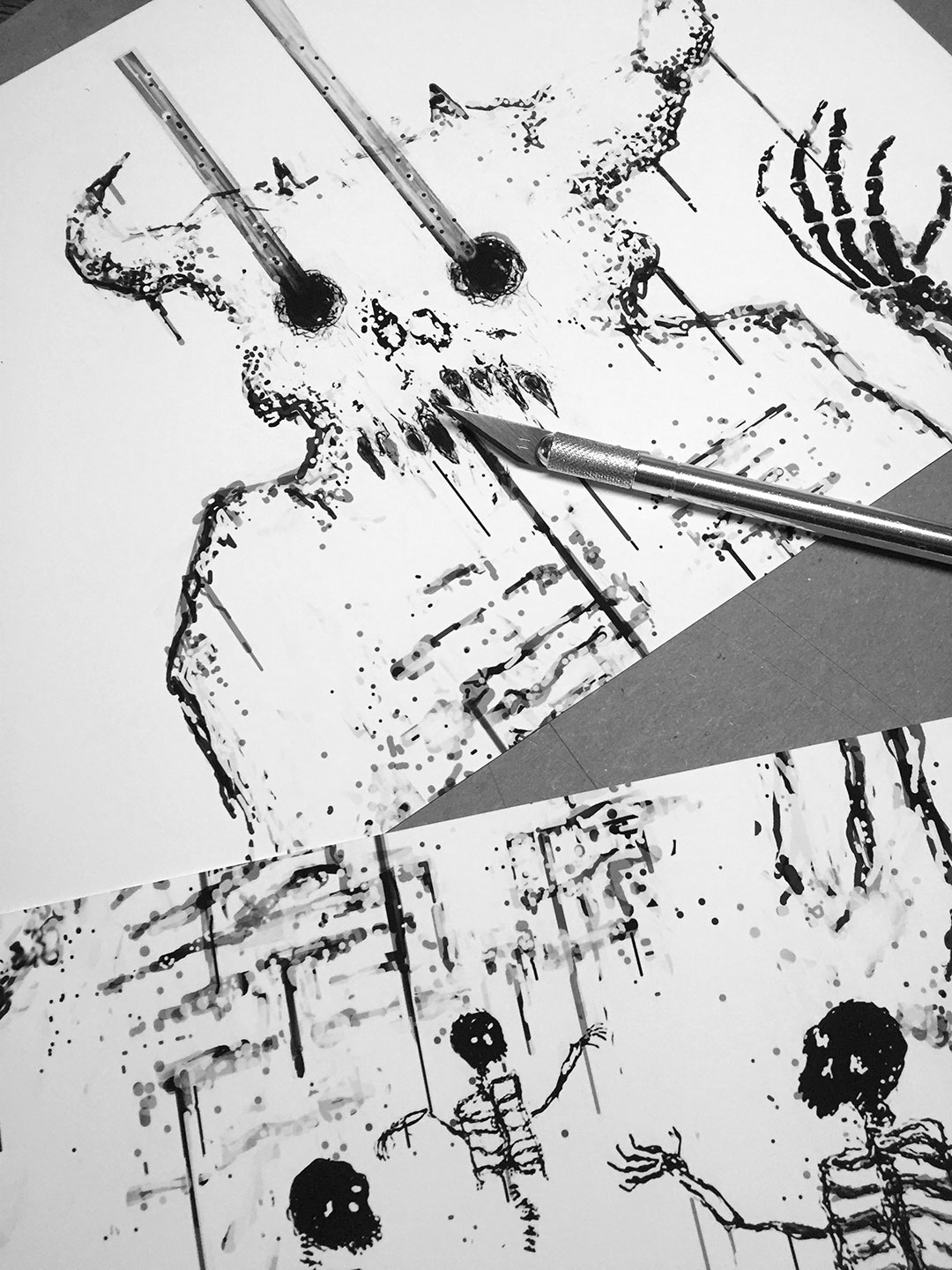 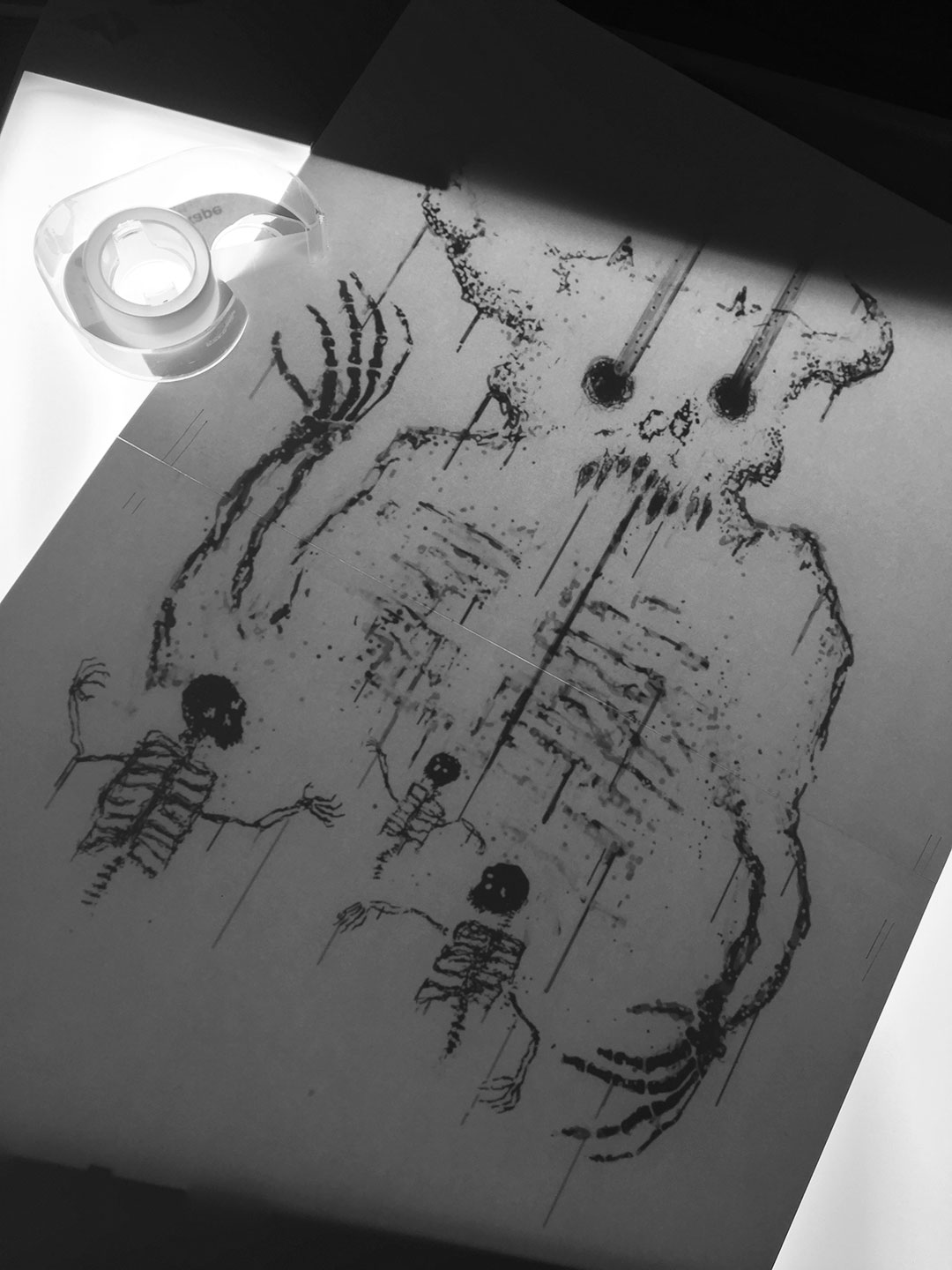 Ignoring the iconic nature of the skull seemed like an unwise decision since it is such an intrinsic part of his public persona. Sometimes there is no need to reinvent the wheel.

Instead, I embraced the skull idea and rendered it with my VoiVod-inspired distortion.

Wondering how the digital mockup came into play? When I began on this piece, I was in the process of moving to another state and simply did not have the usual time to create a full size pencil drawing which I'd transfer over to paper for inking.

Instead, I drew out individual sections by hand and rearranged them within Photoshop. This image was then printed out at 14 x 17"s and transferred to Bristol board. 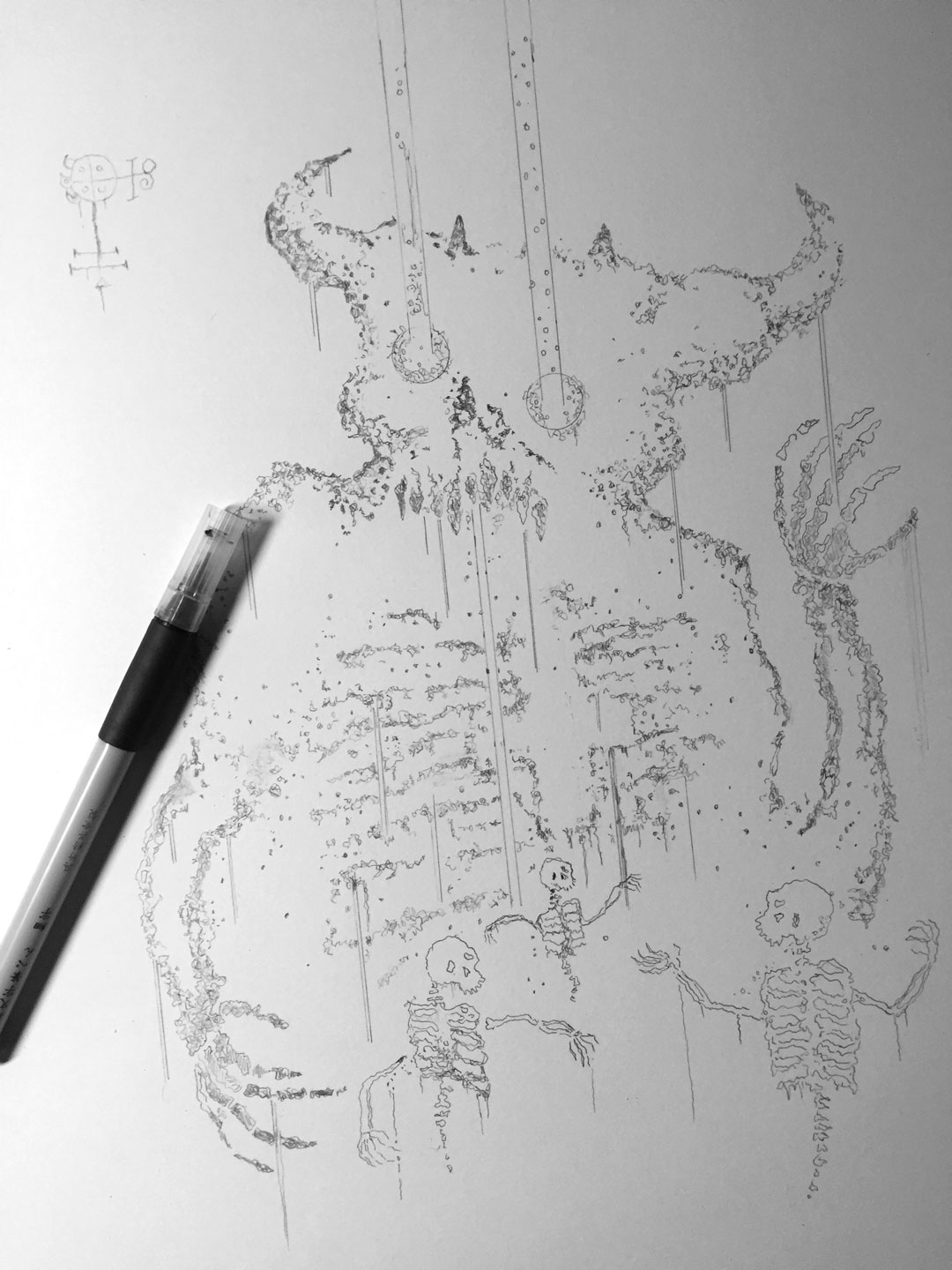 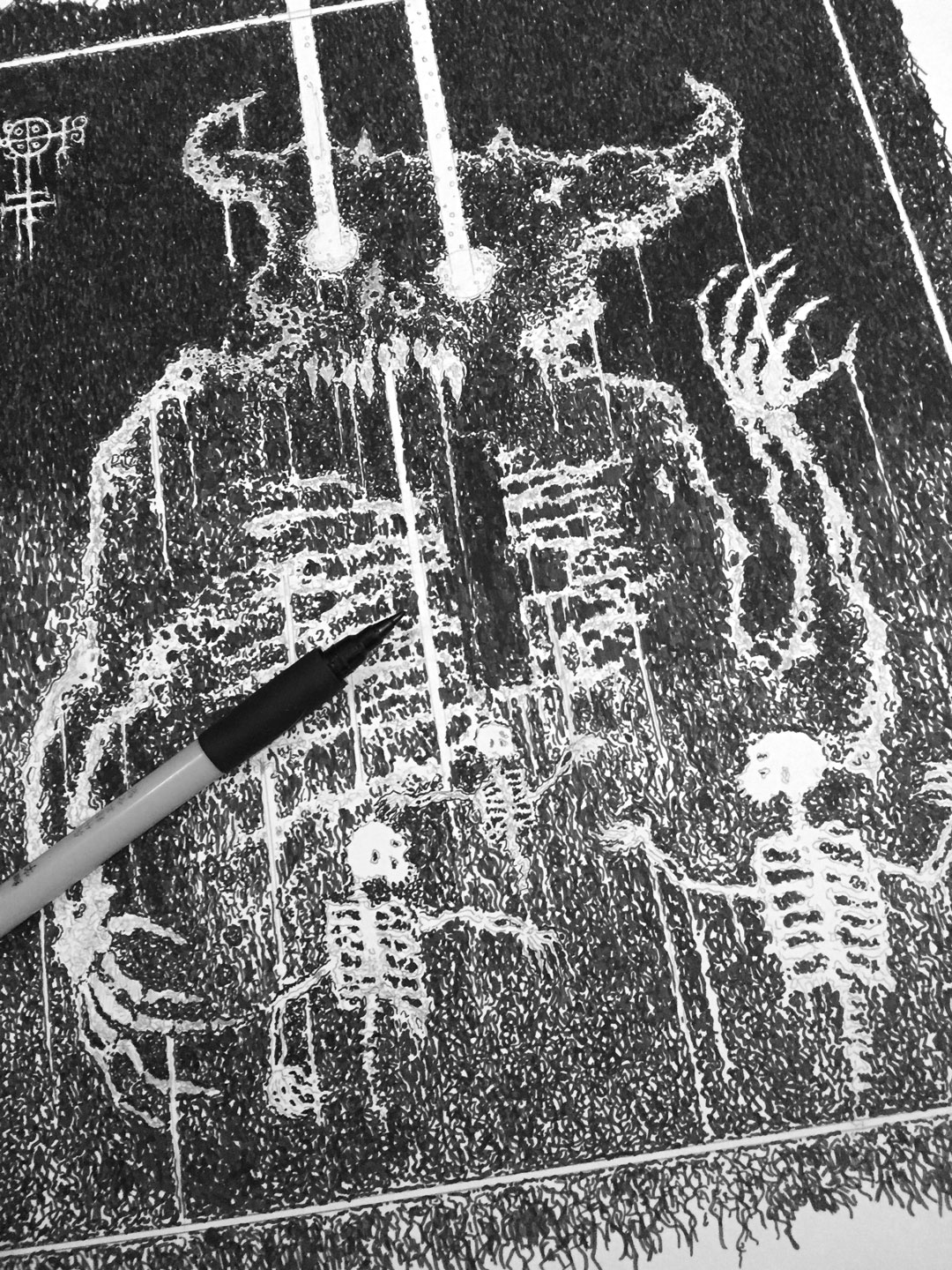 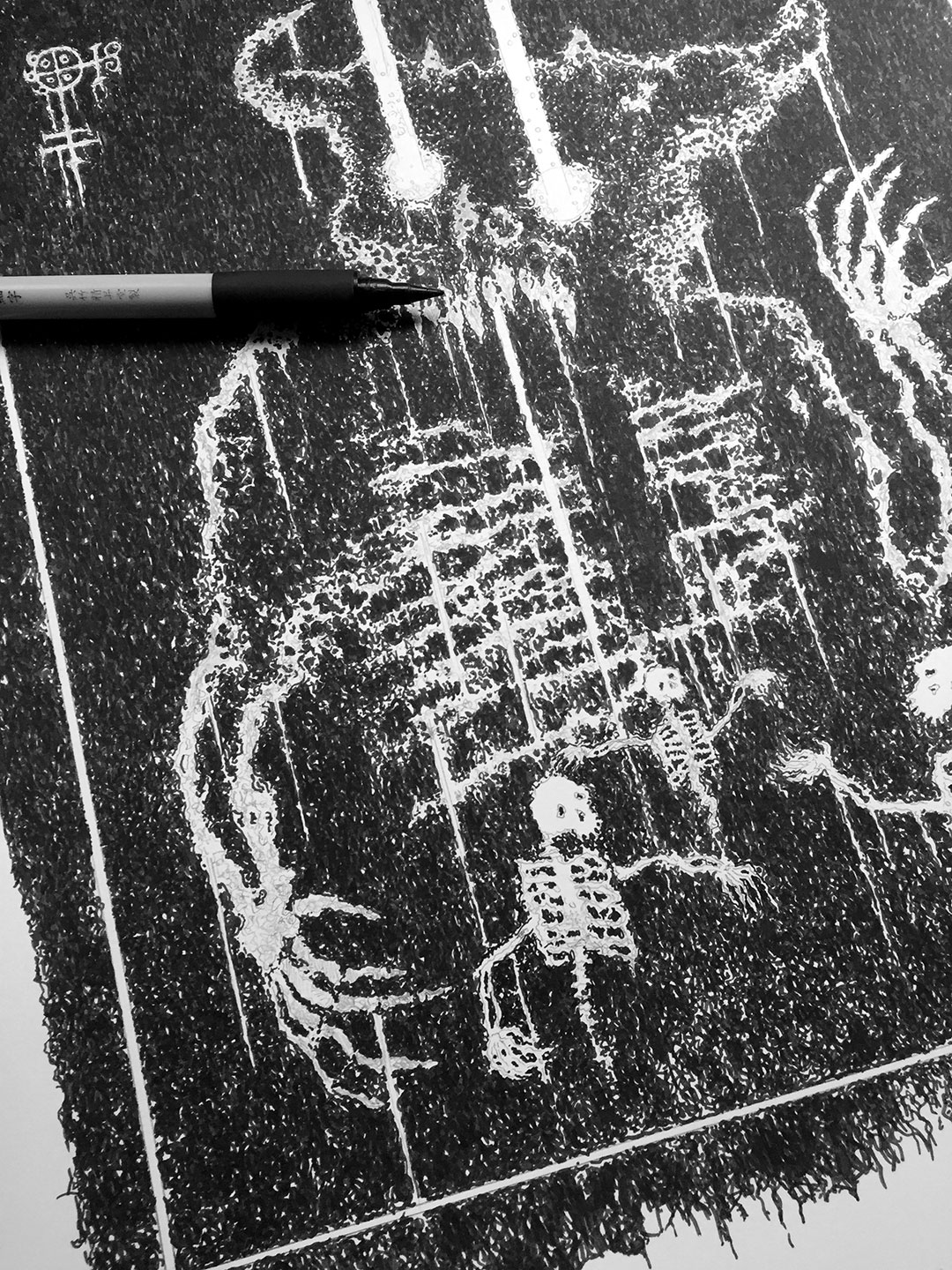 Why did I draw this at larger than the print size? No stress...

Inking this piece was rather straightforward. The images above show just the first layer of ink done in a hacked Japanese brush pen.

Speaking of Japan, does the artwork evoke a Kaiju or demons from Asian folklore that I attempted to reference?

Considering the time crunch and that I drew this larger than the print size, pausing to take in progress photos was a little inefficient - but if you were wondering, the detailing was done with 08, 05, and 02 Micron pens.

After approval, the files were sent over to Burlesque of North America. I've worked with Burlesque years before and they create amazing prints and t-shirts. 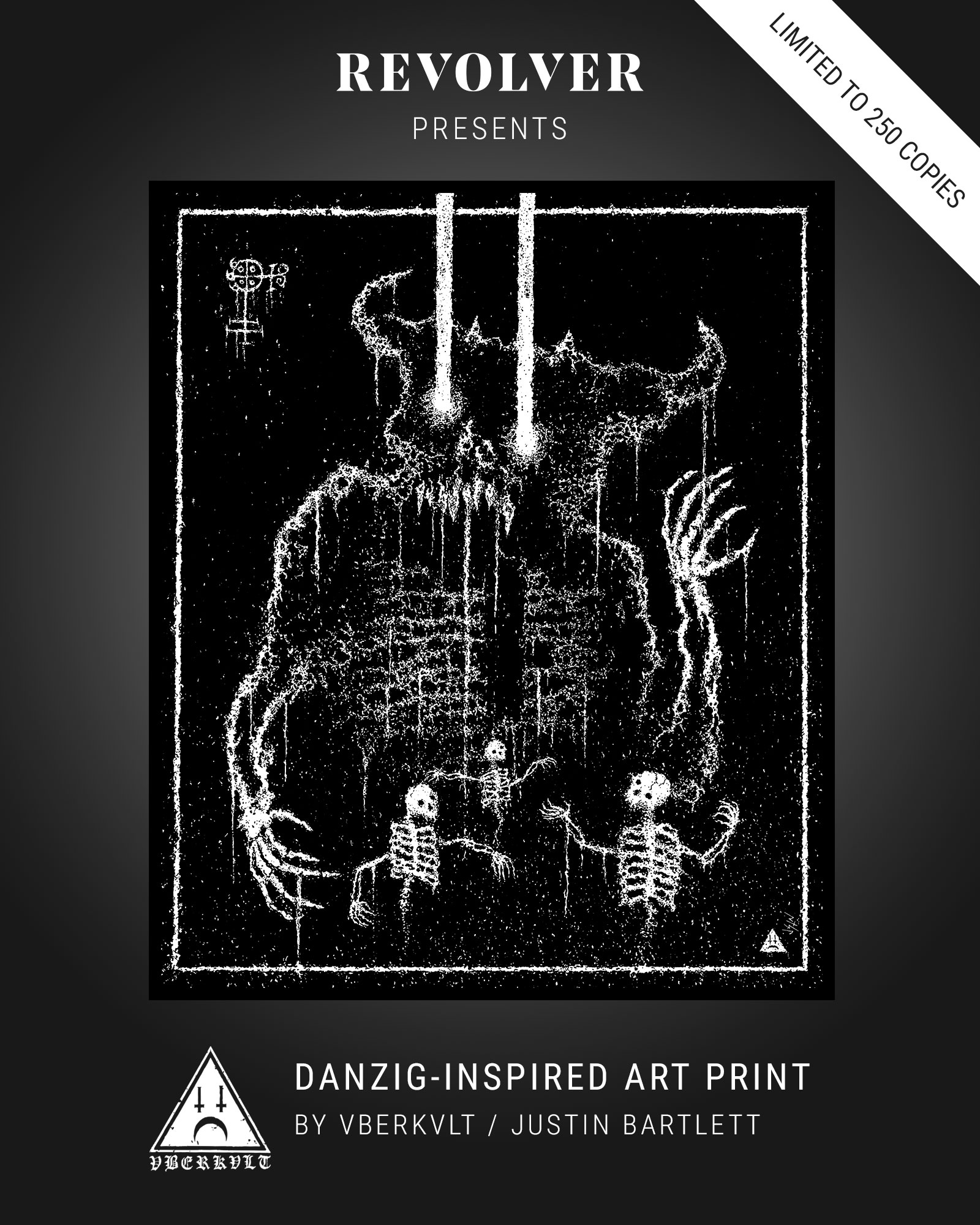 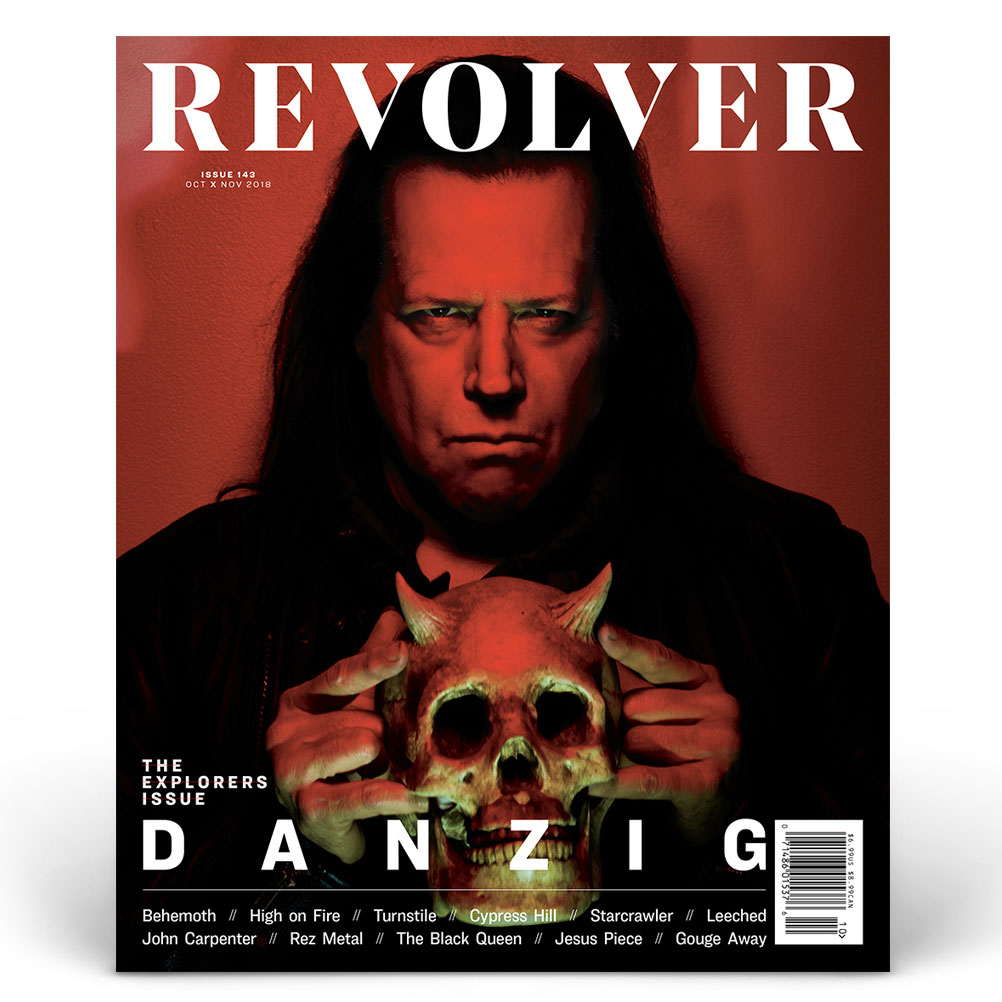 Diehards will be able to spot all of the references. It was an interesting challenge to combine imagery from several albums - obvious or not. Can you find them all?

A trained eye might see hands from "Legacy of Brutality", skeletons from "November Coming Fire", and of course the infamous Danzig skull and symbology from later releases like "Lucifuge".

If you're interested in picking up this demon, there were 250 copies printed to accompany Revolver's "Explorers" issue.

Besides Danzig, Artists like Matt Pike, Turnstile, Cypress Hill, Greg Puciato, Nergal, and John Carpenter are all interviewed for this insightful special edition.

Additionally, the artwork appears within the Danzig feature as well as a limited box set available from Revolver.

Special thanks to Jimmy Hubbard and Sammi at Revolver for making this happen, and Kenn Anything for the research help!