What's more strange or unlikely? Being in one of the magazines you read up growing up or basing a career on drawing mutated goats melting into piles of corpses?

Here's the full text from a recent feature on ten of my "most creepiest works" originally appearing in KERRANG! Magazine.

Originally I am from the sun-soaked abyss of San Diego, California. Although at the moment it’s pretty overcast. My girlfriend and I travel back and forth to Chicago for work, life, and family. The destinations provide an interesting contrast for sure.

How did you end up becoming a (full-time?) artist?

I’ve been on a long music discovery "trip" since age 10 starting with post punk, electronic, synth stuff, industrial music, and then on to heavier realms shortly thereafter with grindcore and death metal.

Unfortunately though I failed at being any kind of musician but I was always a pretty good artist and creative with my ideas. However I never really thought of pursuing my artwork that seriously earlier in life especially in a more entrepreneurial way.

Skip forward many years....after full time graphic design jobs, college loans, and freelancing on the side I had enough music or art-related client work lined up to possibly squeeze by financially.

So I made the jump into being a self employed illustrator/designer. I was lucky because I found a good corporate client as a counterbalance at first, but I left to pursue my own agenda afterwards. However, my journey was derailed by temptation and a lack of perspective, I placated myself with a "secure" but ultimately negative and depressing direction.

Recently though I crawled out that pit and reconnected with my art and I am back on the path to sharing my obscure creations with the world. In a sense really, I just had to get over bad habits, self doubt and well-intentioned but useless ideas that infiltrated my mind for far too long. 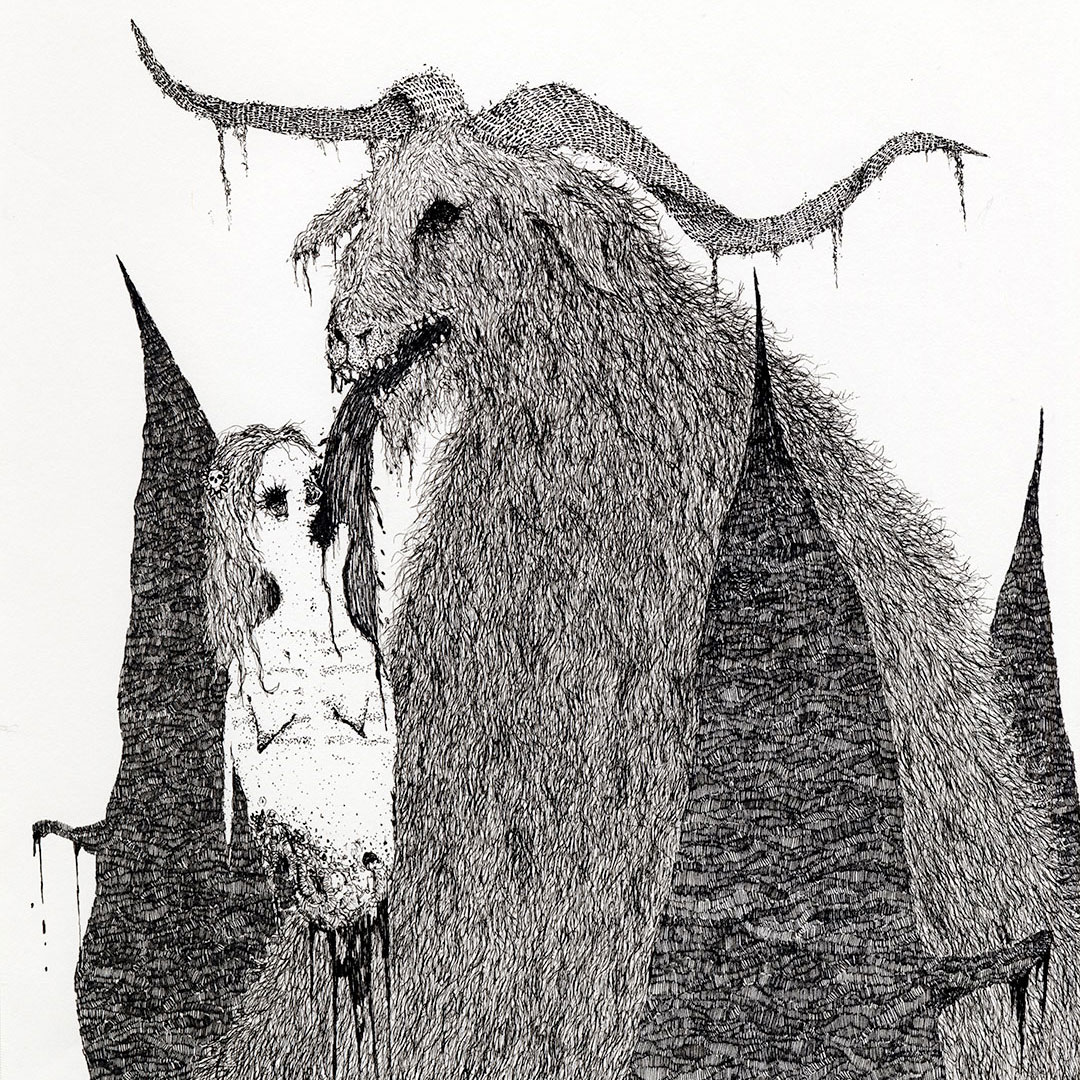 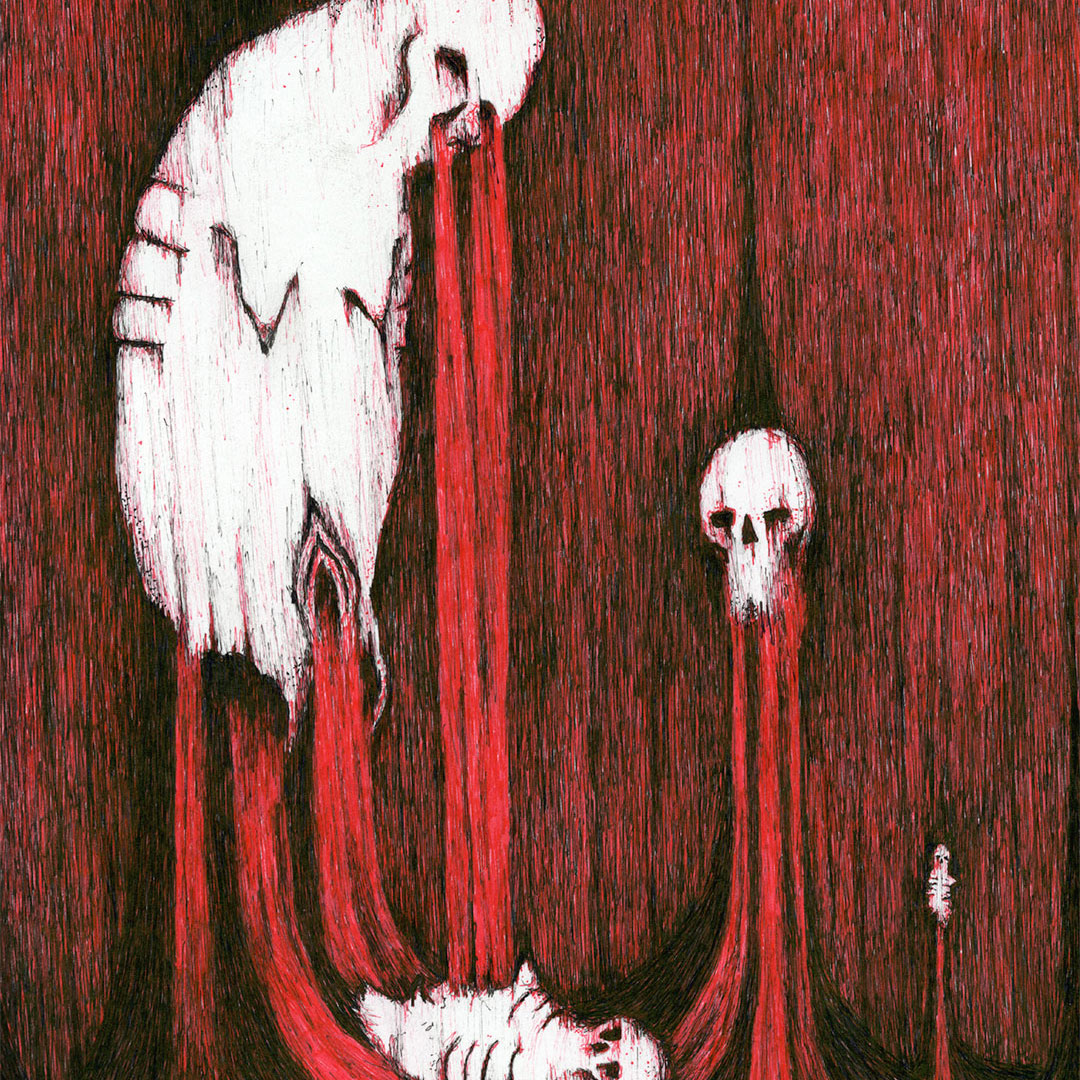 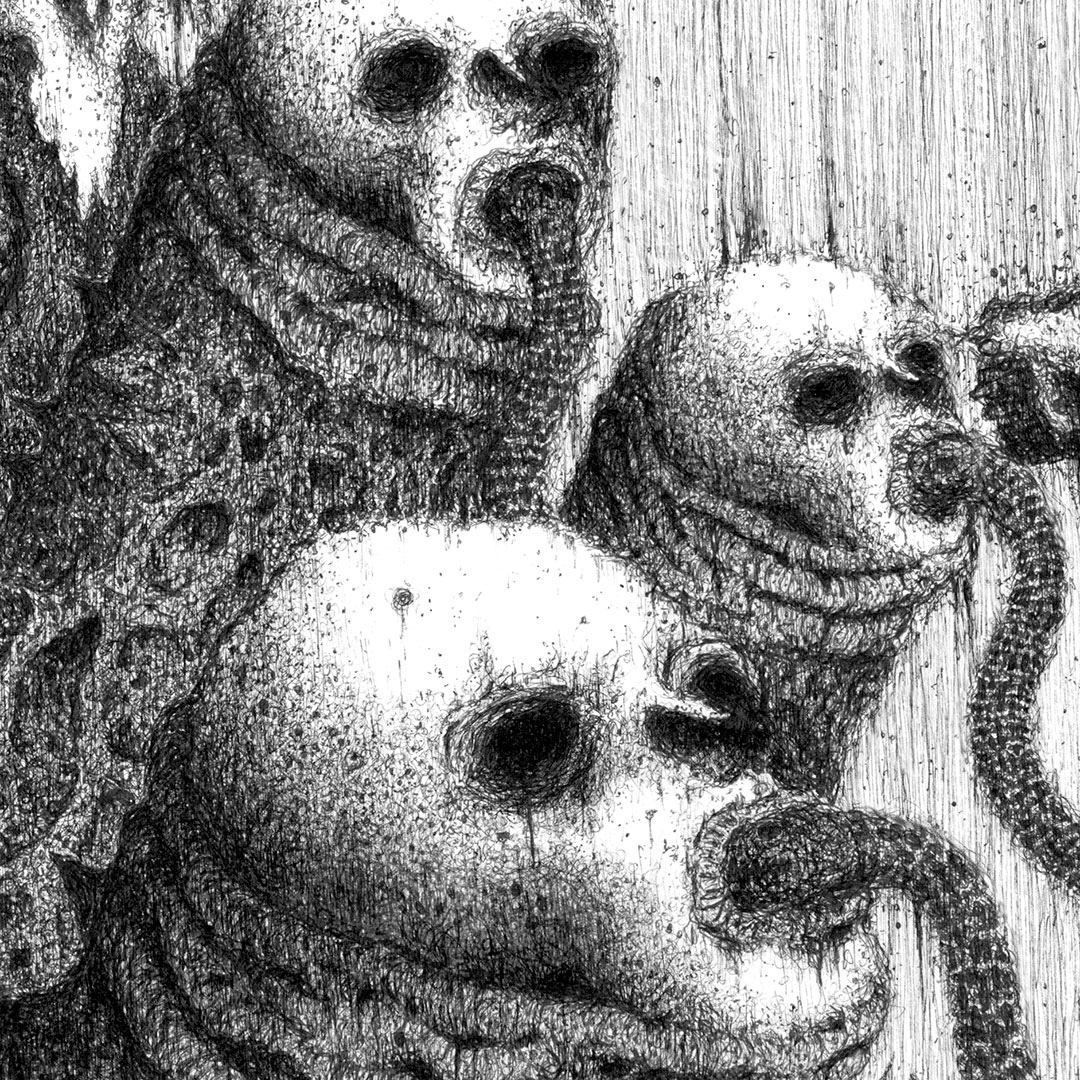 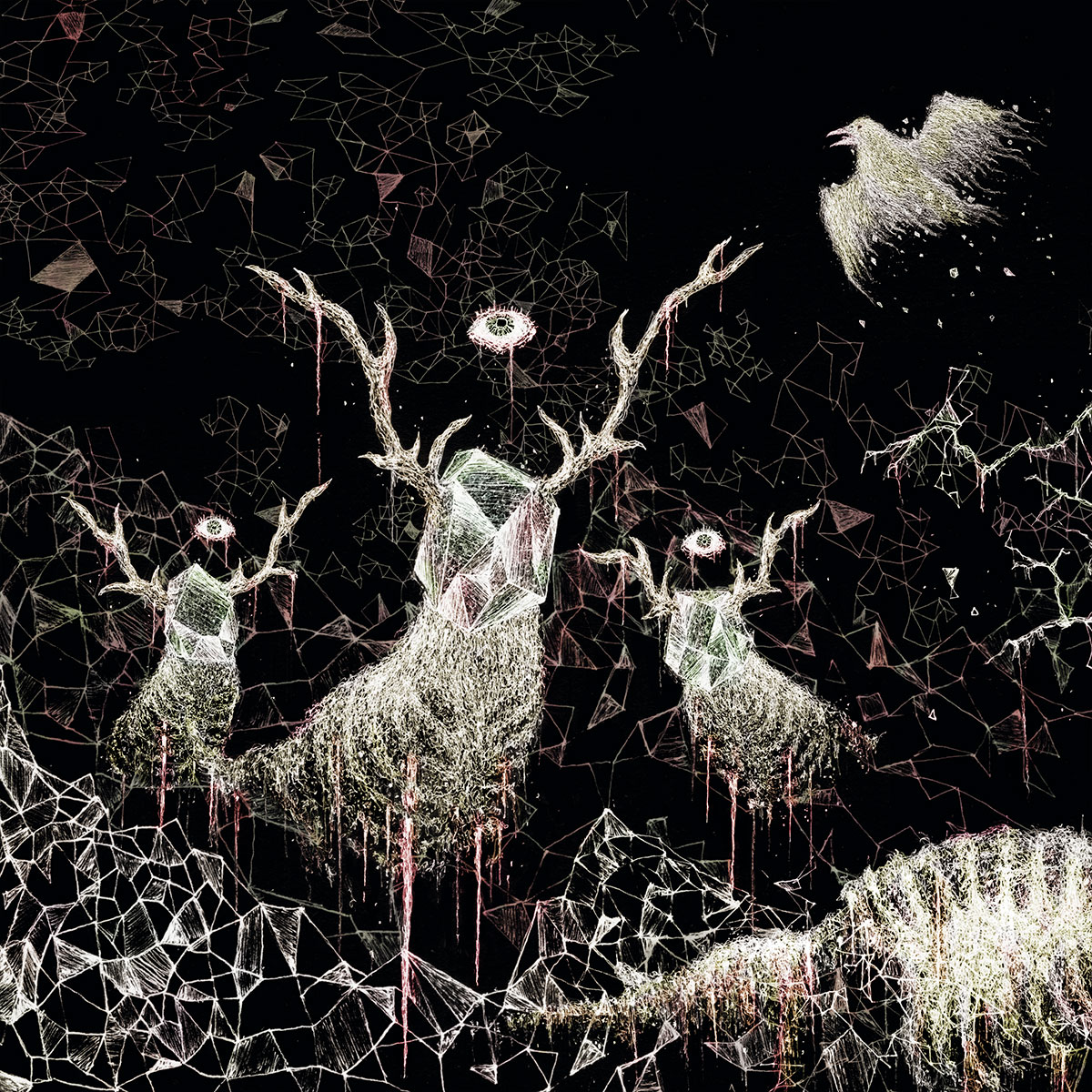 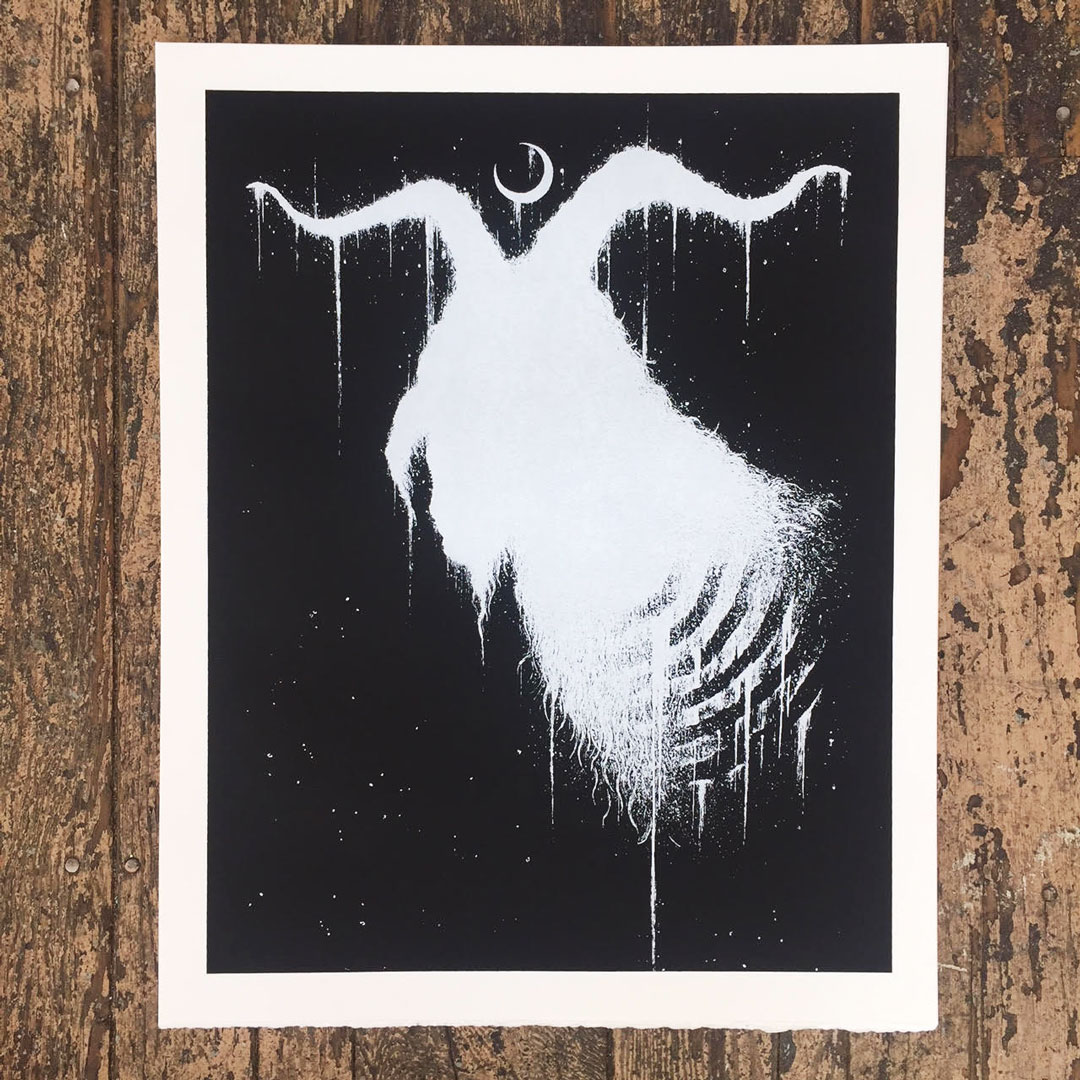 A steady diet of goats and corpses.
From top to bottom: Bohemian Grove (Greece), Detritivore (Norway), Lord Mantis (US), Locrian (US), and The Secret (IT).

A steady diet of goats and corpses.
From left to right: Bohemian Grove (Greece), Detritivore (Norway), Lord Mantis (US), Locrian (US), and The Secret (IT).

What is your main medium?

Pen and ink, layered - heavily layered at times. Occasionally I will create pieces in graphite.

Recently I’ve been exploring some new techniques since I realized that a lot of my art’s detail that I obsessed about was lost during the printing process.  I would love to be take on more work, so I’ve been trying to loosen up a bit and also develop more efficient ways of completing my artwork. 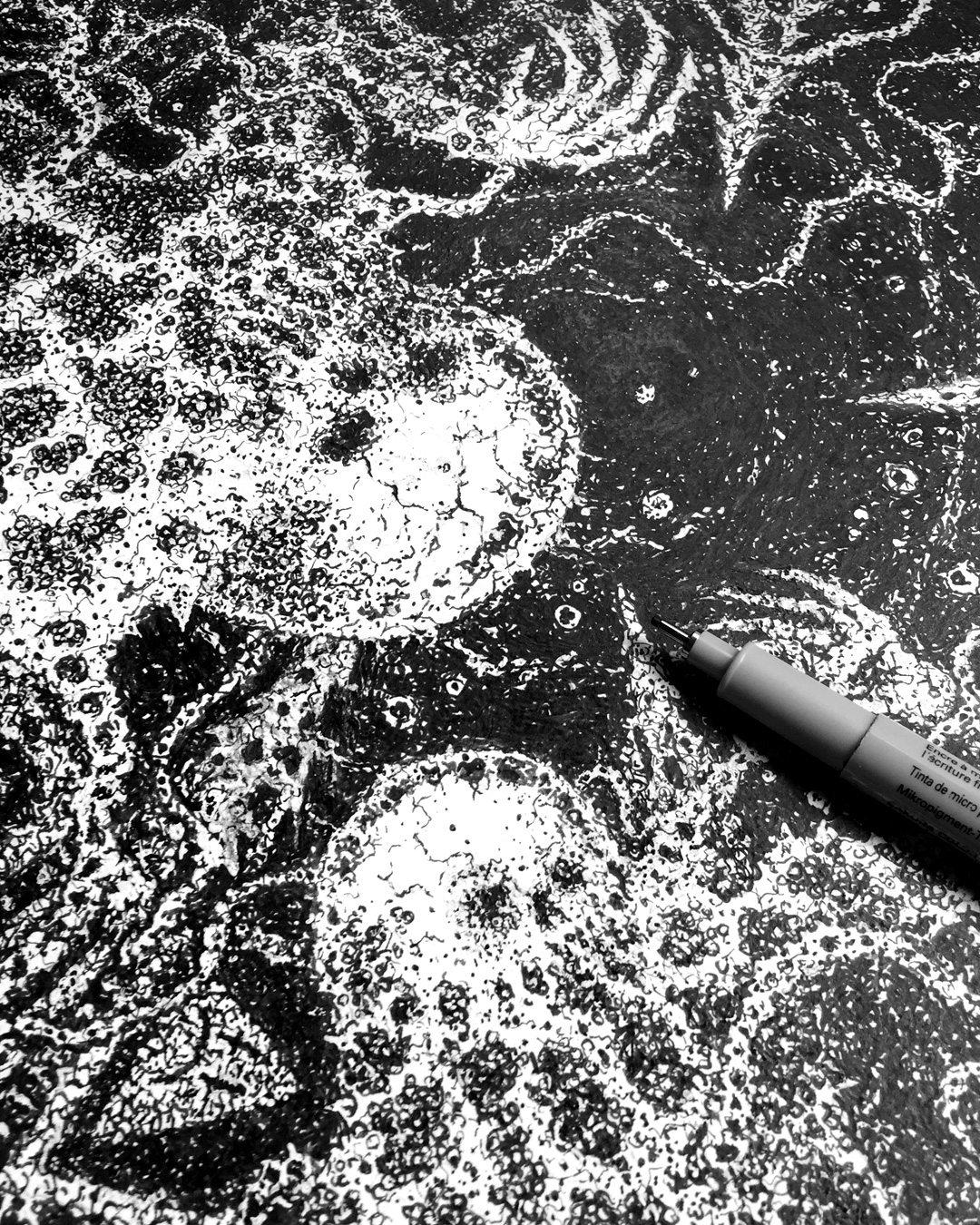 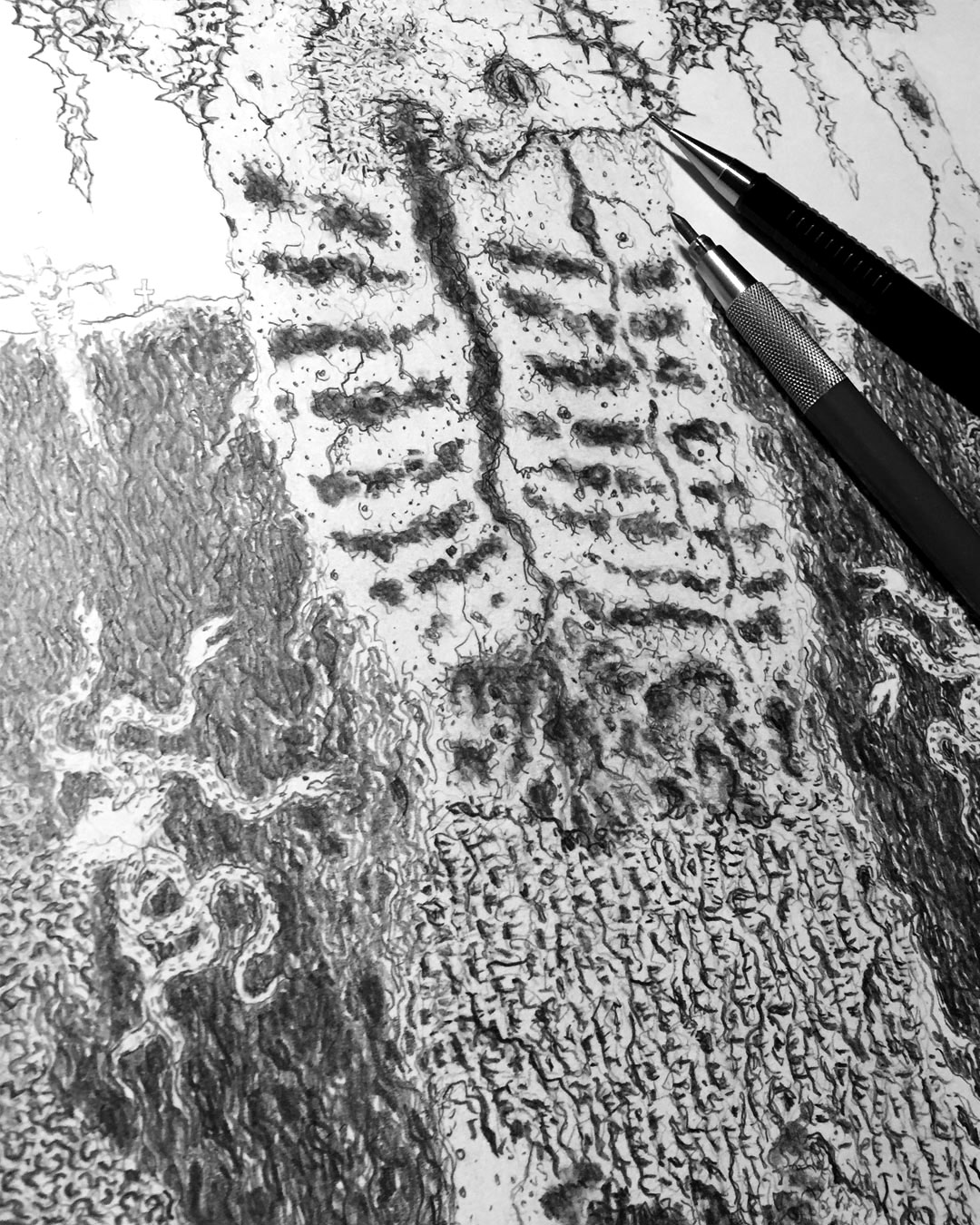 Inking in grim astronauts for Bast (UK) and "Void Christ" in graphite for The Secret (IT).

"Void Christ" in graphite for The Secret (IT).

How would you describe your artistic style?

Very time consuming and overly detailed. Expressionism, if you wanted to use a textbook term. I draw mostly “metal” subject matter in varying degrees of abstraction, exaggeration, and simplification. Although my art does have underlying rules, drawing in this way helps me break from the literal/logical world.

So in a sense, just odd versions of goats, corpses, ritualistic scenery populated by demonic and odd characters surrounded  by occult symbology

Stylized with texture and it’s mostly black and white. 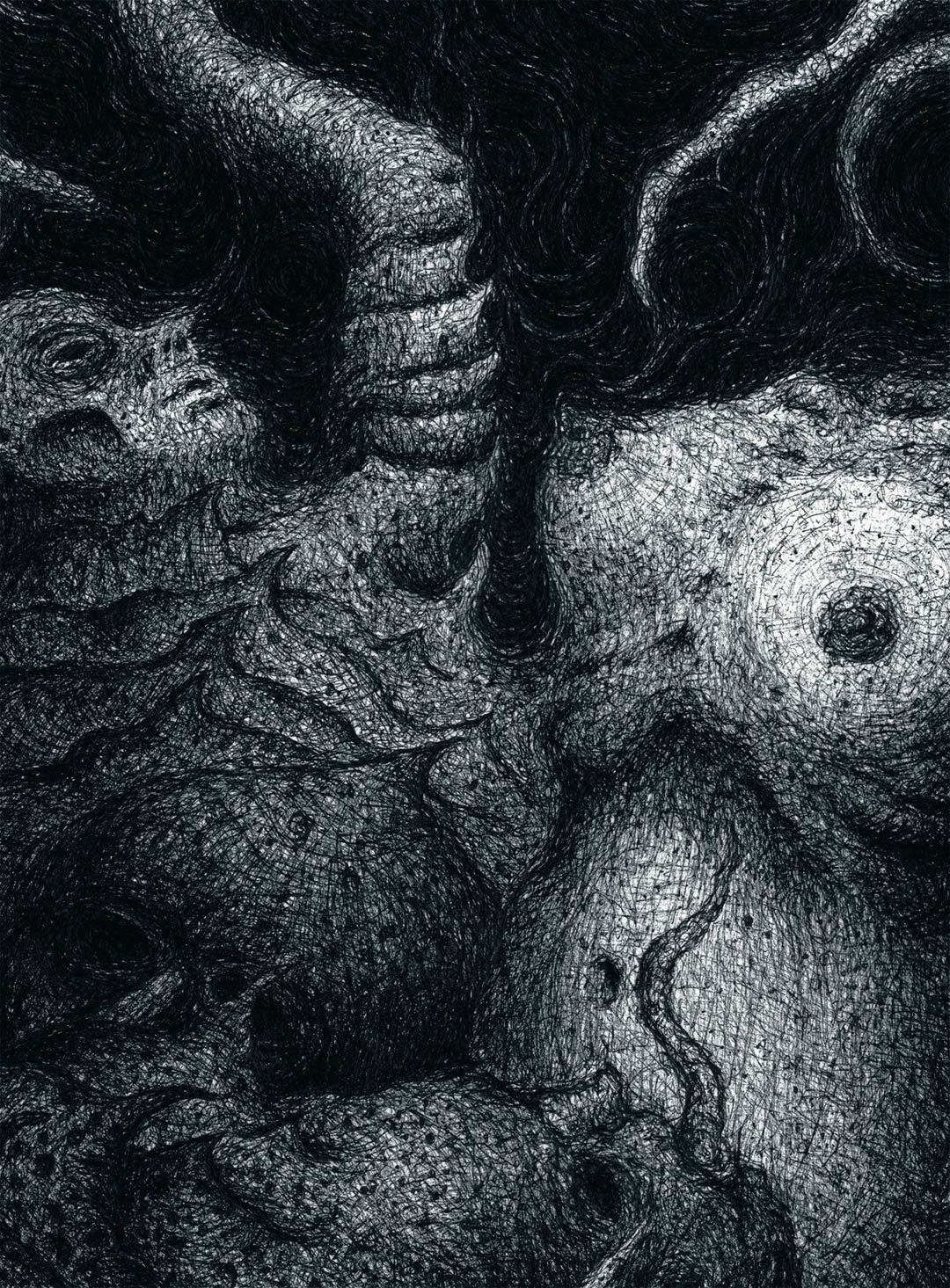 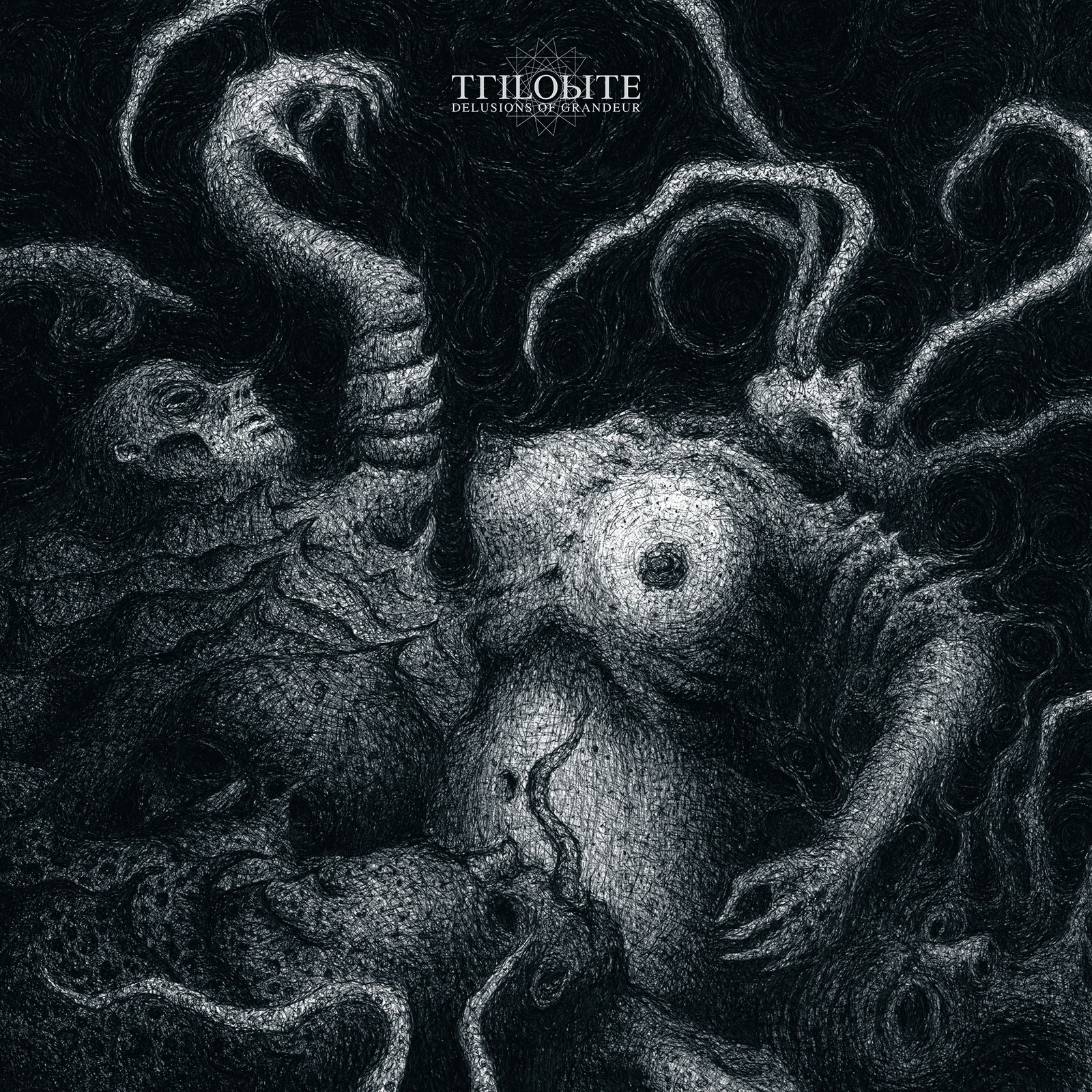 Meditative texturing and vinyl design for Trilobite, a post-metal band from the US.

How and why is your art so dark/disturbing?

I think most people would find the depiction of some strange ritual inside a dripping, rotting cave to be a little strange at least. I hope so. But in terms of being truly disturbing, or “dark”, that’s really in the eye of the beholder. It all comes down to your frame of reference and what you may have been exposed to before.

I am sure the average Kenny Chesney fan would be a bit more “disturbed” by my artwork than the average metalhead or horror fan. That’s pretty obvious, right?

From where do you draw your inspiration?

As far as other artists or mediums go, I’ve never really drawn out boundaries of my influences. Something like Ridley Scott’s “Alien” (HR Giger by proxy) has just as much influence as paintings of a medieval Hell fantasy imagined by Hieronymus Bosch.

I’ve always been into a combination of layered/atmospheric music and movies too. Not layered in a meaning sense, but in an atmospheric or dreamy kind of way. Usually that comes with a considerably awesome score as well.  If you’re familiar with Michael Mann’s film “The Keep” with score by Tangerine Dream, that’s a pretty good example. It’s a combination that can be found in any genre of film: giallo, horror, fantasy, suspense, science fiction, sex comedies. Those kinds of influences definitely stem from my childhood since I was exposed to a lot of age inappropriate films thanks to Dad and Grandma. 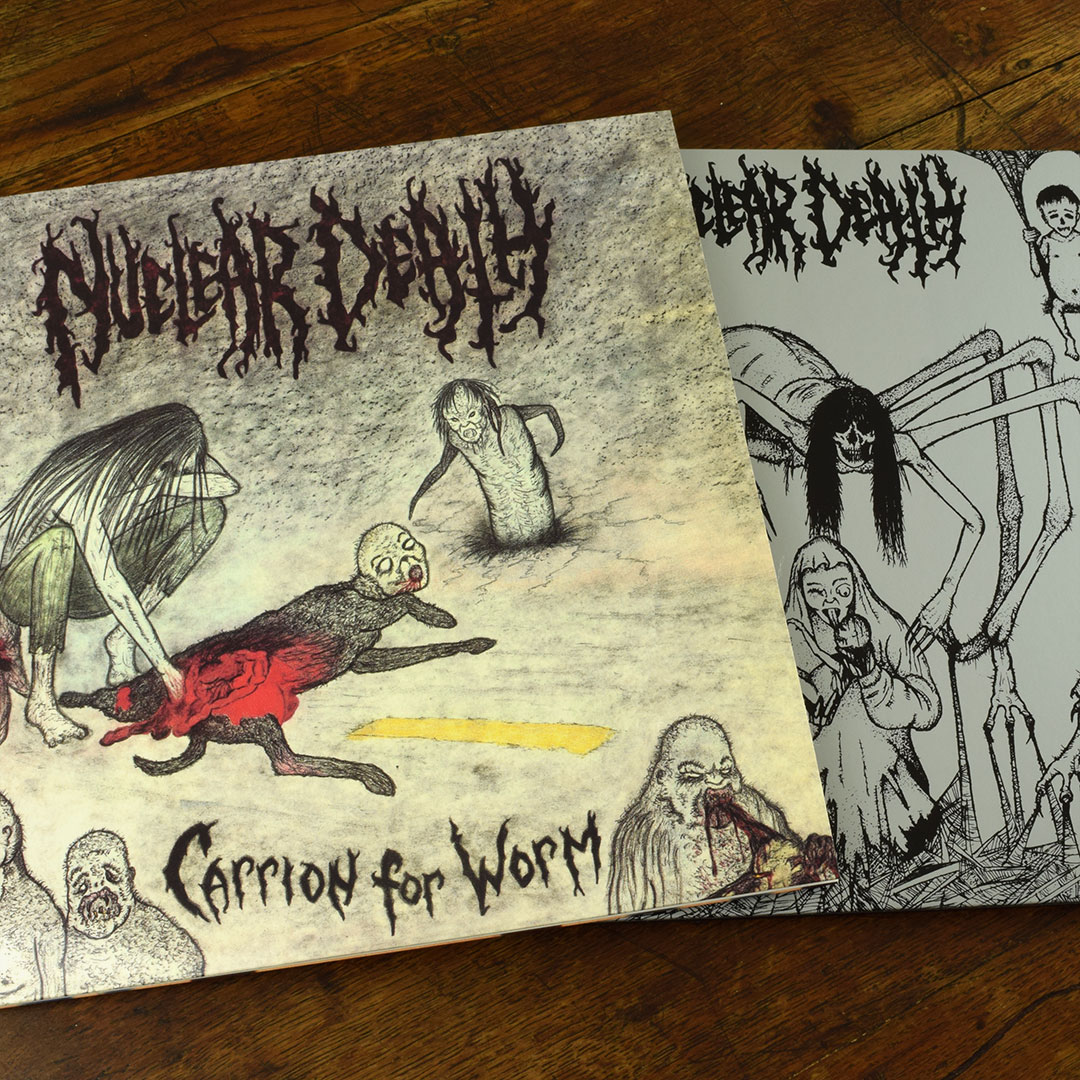 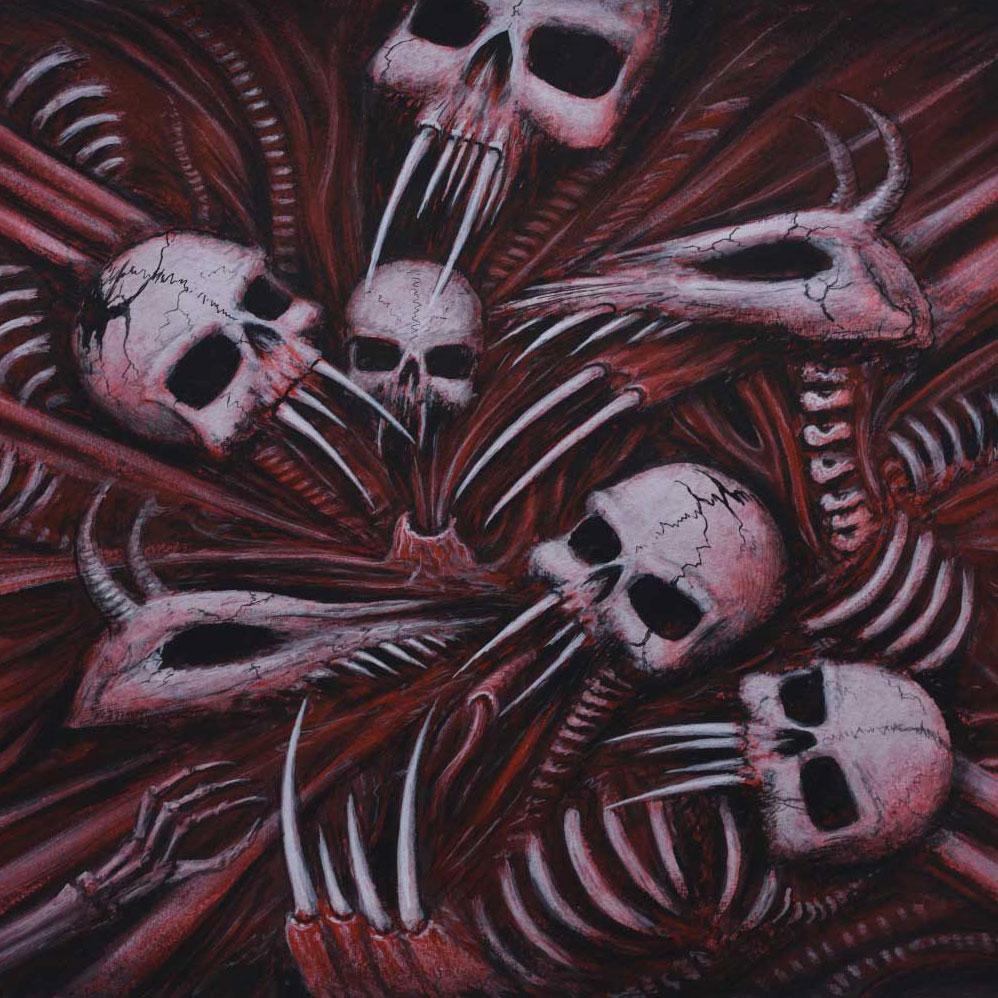 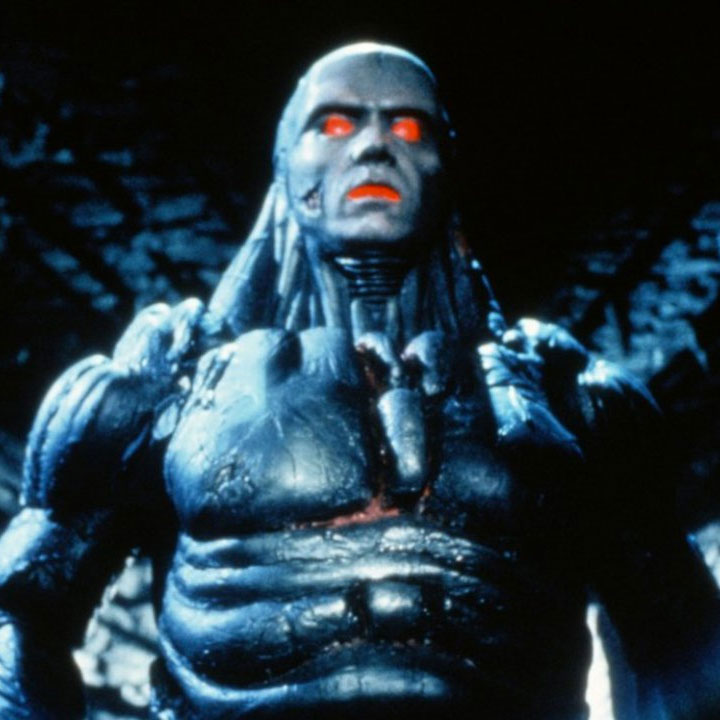 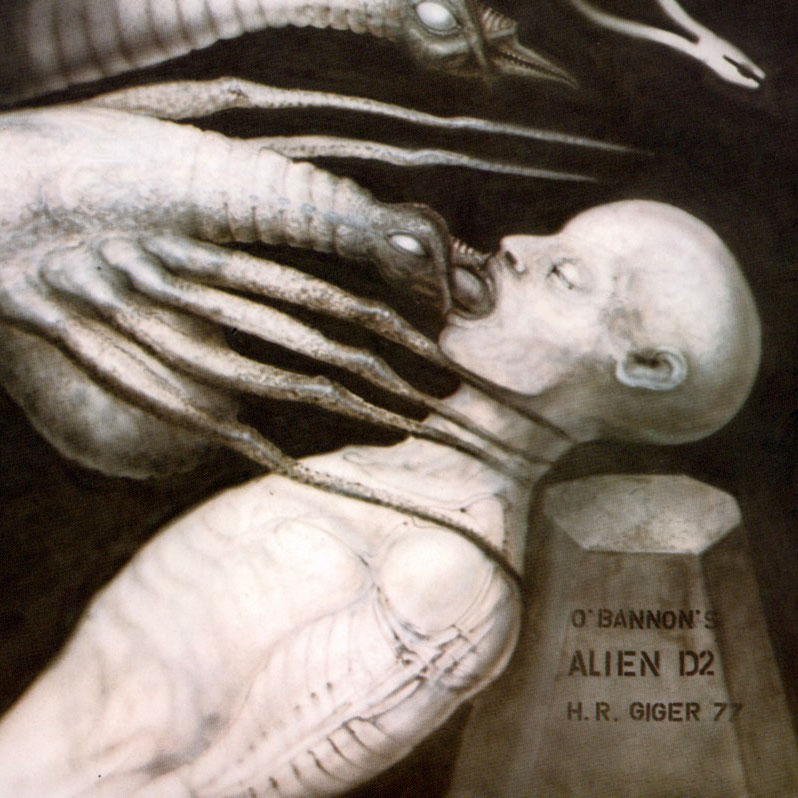 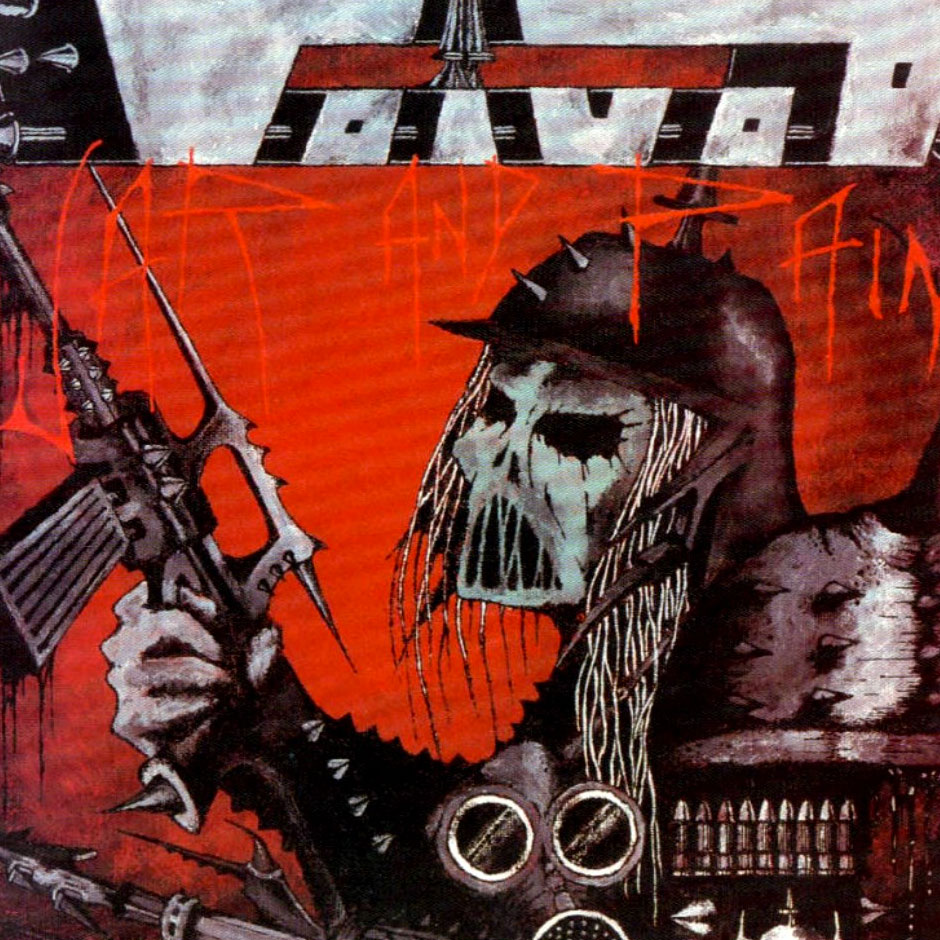 Definitely more abrasive creations like death and black metal music and imagery have left an indelible stamp on my artwork. The musical violence created by Entombed on “Clandestine” and accompanying Dan Seagrave nightmare visuals are just as important to me as something like John Carpenter’s “The Thing” and Morricone’s score.

Other “underground music” artists like Away from Voivod, Nick Blinko of Rudimentary Peni, and the artwork by Rok from Sadistik Exekution are inspirations as well.